Michael Kills At Least 6, Leaves Behind Catastrophic Damage In Florida 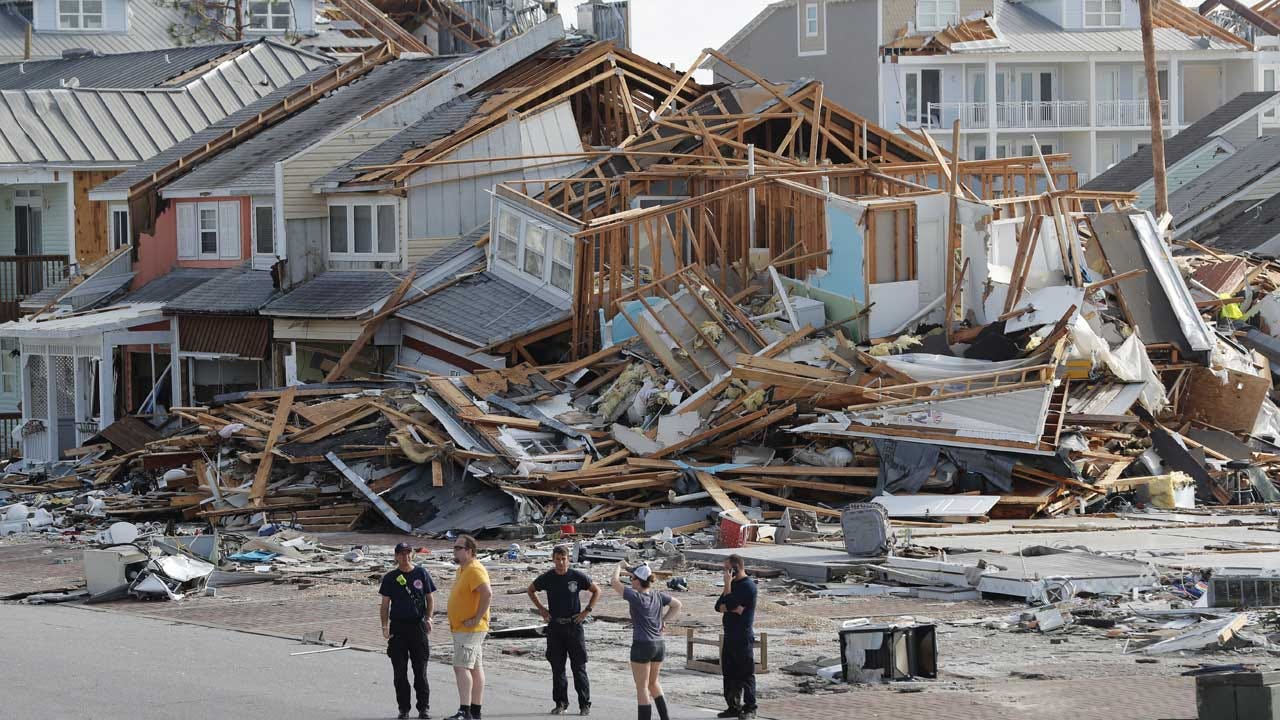 Tropical Storm Michael has sped off toward the Atlantic Ocean, but there will be nothing quick about Florida's recovery from the hurricane, where rows upon rows of homes have been smashed to pieces. The storm also has brought flash flooding to hurricane-weary parts of North and South Carolina and Virginia.

One of Michael's survivors said his city "looks like an atomic bomb" hit it. Florida's Panhandle is one huge disaster zone after catastrophic winds, heavy rain and devastating storm surge.

Michael was the third-most powerful hurricane ever to make landfall in the U.S. mainland. The storm has been blamed for at least six deaths.

As of mid-afternoon Thursday, more than 687,000 homes and businesses in the Southeast had no electricity. Michael was a tropical storm, hitting North Carolina and South Carolina with heavy downpours and threatening to cause tornadoes.

At 5 p.m. ET, Michael's core was approximately 20 miles north-northwest of Raleigh, North Carolina, heading northeast at a rapid 24 mph, with maximum sustained winds of 50 mph, according to the National Hurricane Center.

Michael by the numbers

Powerful pressure: 919 millibars minimum pressure in the eye, the third most intense hurricane landfall in the U.S. in recorded history.

High water: Estimated peak storm surge of 9 feet and 14 feet from Mexico Beach east through Apalachee Bay, according to the National Hurricane Center.

Storm riders: Roughly 375,000 people in Florida were warned to evacuate; many refused, including 285 people in Mexico Beach where Michael made landfall.

Rescued: 47 helped out of hard-hit areas along Florida's coastline, and 20 people in flooded neighborhoods in North Carolina.

Food and water: 2 million ready-to-eat meals, 1 million gallons of water and 40,000 10-pound bags of ice ready for distribution in Florida.

The human cost: At least six people have been confirmed dead. Falling trees killed a man in Gadsden County, Florida, and a man in Iredell County, North Carolina. An 11-year-old girl in Seminole County, Georgia, was killed when a carport blew through the roof of her home.

Florida Gov. Rick Scott asked to delay a debate with Sen. Bill Nelson for two weeks so he can focus on response-and-recovery efforts following Hurricane Michael. Scott, a Republican, issued a statement Thursday asking CNN to postpone the debate with the Democratic incumbent, which was originally scheduled for this coming Tuesday.

Scott cited "catastrophic destruction caused by Hurricane Michael" and said he's certain Nelson agrees the response should be a priority. He said, "We appreciate CNN understanding the dire situation in North Florida," and added that Scott "will have no time for campaigning in the next few weeks as he focuses exclusively on recovery efforts for the foreseeable future."

FEMA Administrator Brock Long said it could take months, or even years, for some of the hardest-hit areas to recover from the storm.

Bands of rain from Hurricane Michael lashed the western part of North Carolina, causing some water rescues and a landslide that closed a road. Gov. Roy Cooper urged all residents to be on alert as the storm blows through the state.

Brissie said about 20 people were pulled out of neighborhoods inundated by flash flooding. He said he's not aware of any injuries.

McDowell County emergency services director Adrienne Jones said a landslide closed a road and a swift-water rescue crew pulled a man to safety in Buncombe County. In Asheville, two people in a hammock who found themselves surrounded by floodwaters were pulled onto an inflatable boat.

A federal judge rejected a push to extend Florida's voter registration deadline because of Hurricane Michael, saying there's "no justification" to do so. U.S. District Judge Robert Hinkle ruled late Wednesday against the Florida Democratic Party, which called the Republican-led response to the storm's disruption confusing and inadequate.

Florida's deadline to register to vote was Tuesday, 29 days ahead of the Nov. 6 election. Florida Secretary of State Ken Detzner told local election supervisors that if their offices were closed Tuesday due to the hurricane, then they could accept paper applications for a single day once their offices reopen.

A coroner has identified the 11-year-old girl who was killed as Hurricane Michael blew through south Georgia. Seminole County coroner Chad Smith on Thursday identified the girl as Sarah Radney.

Smith said an official cause of death had not been determined but that it would likely be massive blunt force trauma. Seminole County Emergency Management Agency director Travis Brooks said strong winds picked up a portable carport Wednesday and dropped it on the roof of the home sheltering the girl.

One of the carport's legs punctured the roof and hit the girl in the head.

President Trump defended attending a campaign rally on Wednesday night in Pennsylvania as Hurricane Michael raked across Florida. "I couldn't tell people that had been standing in line for a day and a half wanting to get into the arena that I'm not going," the president told reporters in the Oval Office on Thursday morning.

"We had great control over what we were doing, both on Air Force One, at the White House and in Florida," Mr. Trump said. The president is planning to attend similar rallies in Ohio on Friday night and in Kentucky on Saturday night.

Mr. Trump is expected to visit areas affected by Michael early next week.

Crews were out early Thursday searching for more victims. Hodges said the number of rescues remains fluid and there were no reports of deaths so far from the Coast Guard's missions.

Florida emergency officials said they're starting to transfer patients out of damaged health care facilities. They're also trying to figure out the extent of damage to roads and bridges.

A huge swath of Interstate 10, the main east-west route near the coast, was blocked off due to damage.

Gov. Rick Scott said people from Florida's Panhandle to the Big Bend woke up to "unimaginable destruction." He said Hurricane Michael has changed lives forever and "many families have lost everything."

"This hurricane was an absolute monster," he said. In Panama City, Bay County emergency management officials said most roads remained blocked by water or debris Thursday morning, so survivors should "stay put and standby."

As for people outside the disaster zone, officials are asking those moved by images of the destruction to make monetary donations to relief organizations rather than sending supplies.

Georgia girl killed by leg of carport, not tree

Authorities are correcting early reports about the death of an 11-year-old girl as Hurricane Michael blew over southwest Georgia. Seminole County Emergency Management Agency director Travis Brooks said it wasn't a tree but a carport that hit her home and killed her.

He said strong winds picked up a portable carport Wednesday and dropped it down on the roof. One of the carport's legs punctured the roof and hit the girl in the head.

Brooks said he wasn't able to get out much overnight to fully assess the damage in the county because downed power lines and trees made roads impassable in the darkness. But he said the sheriff told him it looked like a bomb had gone off.

Michael appeared to do its worst in Panama City

The roof of a school gymnasium was torn open. An entire freight train was pushed clear off the rails.

Sabrina Marshall was inside her home as parts were torn away from her. "And the door just -- psssh -- and the roof flew off," she said.

Downed trees and tangled power lines have made many streets impassable. "I was in a bunker, almost a bunker," Karen Hasket said, "and just prayers."

At Tyndall Air Force Base near Panama City, the devastation was extensive. An entire roof was stripped from an aircraft hanger.

Overturned trucks and debris littered the tarmac. The base commander had ordered an evacuation on Monday.