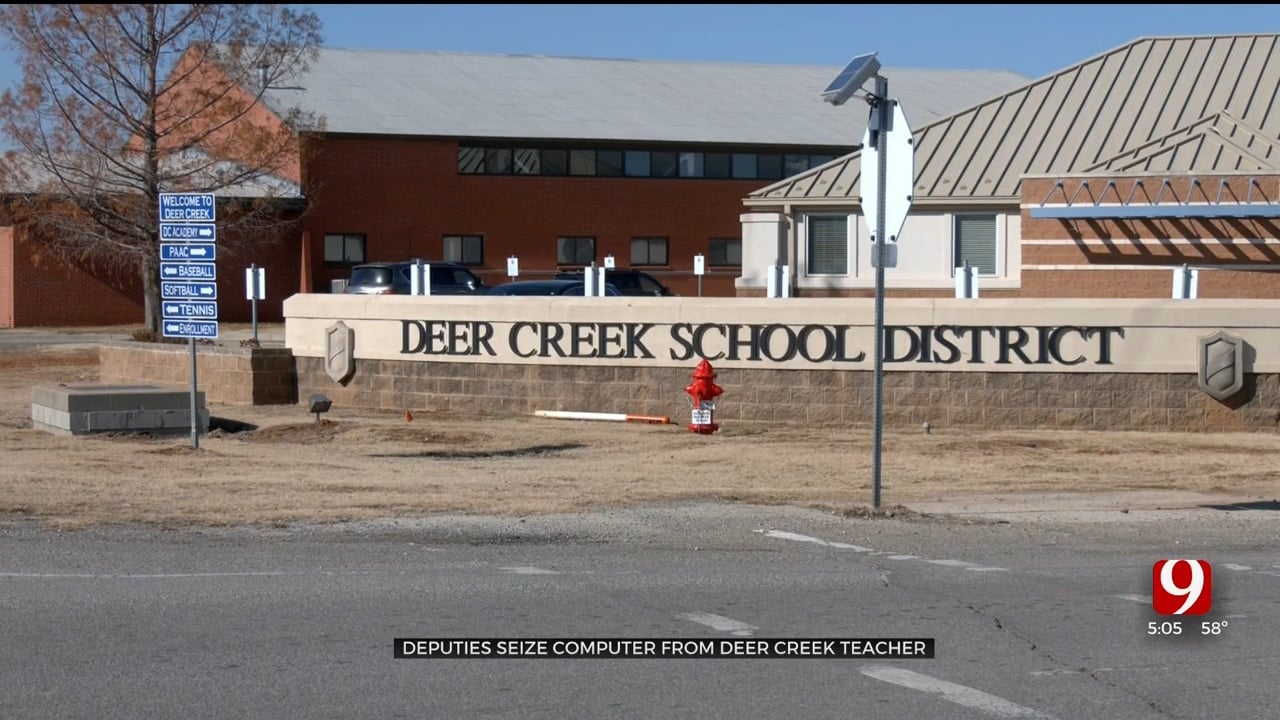 The Oklahoma County Sheriff’s Office has executed a search warrant at Deer Creek High School looking for evidence in the investigation of an inappropriate relationship between a teacher and student.

Deer Creek High School teacher Sarah Hull-Degroat was arrested last week after school officials and law enforcement found out about the inappropriate contact between her and a student.

Recent court documents show Hull-Degroat was advised by the principal to plead the fifth and ask for an attorney when she was arrested:

The search warrant also states: "Hull-Degroat invited to share this document with the school generated student email account of the minor student. Because the communication was shared this way, software utilized by the school was able to flag certain words related to sex and thus alerted school officials."

Sheriff Tommie Johnson told News 9 Thursday at a press conference, "We're looking at everything we’re looking into the case, communications between parties, obviously emails, anything that could go into this were looking into that.”

“Investigators were made aware that Deer Creek Public Schools had evidence that was vital to the investigation and that’s why the search warrant was obtained," Johnson said.

The search warrant stated that “the most complete body of evidence is held within the laptop computers” that were being held at the Deer Creek Administration building.

“Anything that goes on the internet, on computers, there's always time stamps and digital footprints left behind and you can always track that down," Johnson said.

Deer Creek told News 9 in a statement Thursday: “The law doesn't allow a public school to turn over student records simply because law enforcement requests them, even if the information in the records might be relevant in a criminal case.” They went on to say: “Once the OCSO provided the required documents, within minutes the records requested were provided.”

Johnson said that Deer Creek school was cooperating with their investigation and did cooperate during the search warrant Wednesday night.

“I believe everything is onward and upward and everybody is on board and they're participating in the investigation," Johnson said.

The Sheriff said they are still investigating to determine if the relationship was physical, if there were any other students involved and exactly how long the relationship had gone on for.

Protecting the safety of our students is our highest priority. Public schools have a difficult job in trying to satisfy the demands of law enforcement while at the same time complying with state and federal laws for the confidentiality of student records. The law doesn't allow a public school to turn over student records simply because law enforcement requests them, even if the information in the records might be relevant in a criminal case. Deer Creek School District will always provide student records in a manner that follows the law and does not violate the rights of a student.

The rationale to expedite this search warrant inaccurately portrays our past and current relationship with the Oklahoma County Sheriff’s Office (OCSO) and our willingness to cooperate with law enforcement in accordance with state and federal law.

As stated above, to release student records to law enforcement we are required by law to receive a court order unless parental permission is granted. Once the OCSO provided the required documents, within minutes the records requested were provided. Deer Creek Schools first notified the OCSO regarding this situation and has worked diligently within the law to assist in their investigation throughout this process.