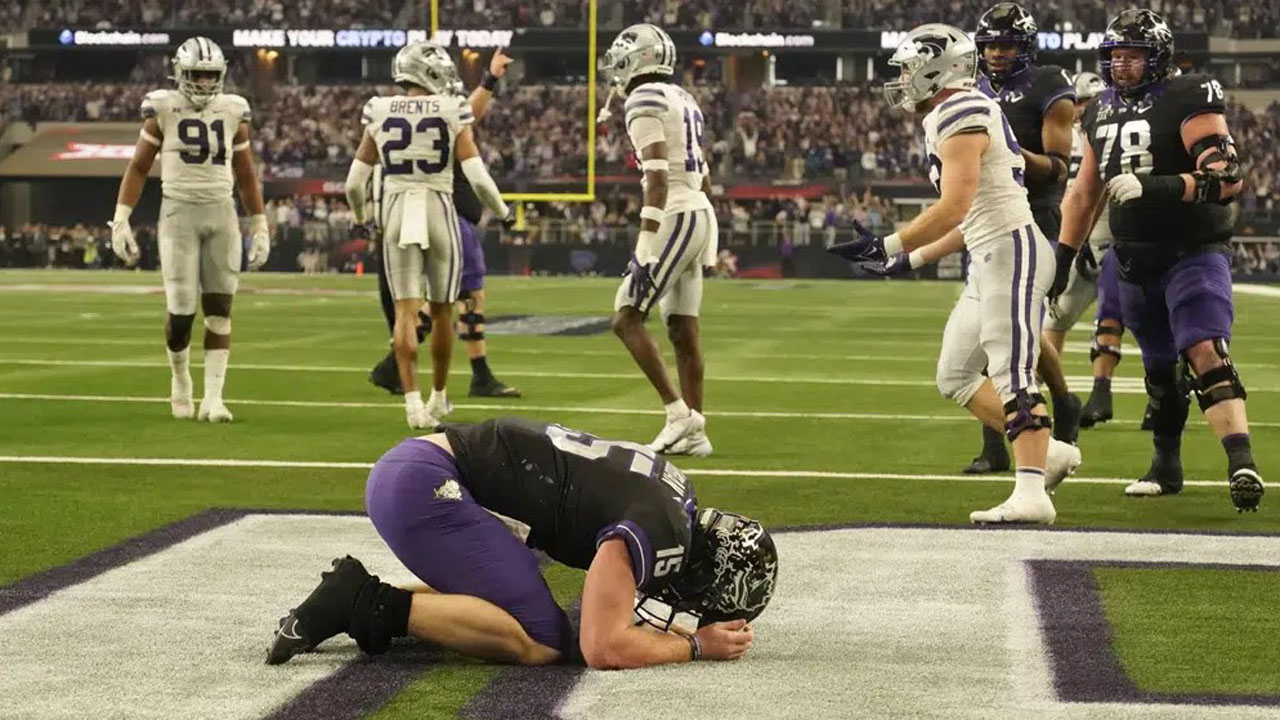 Ty Zentner kicked a 31-yard field goal in overtime as 13th-ranked Kansas State beat No. 3 TCU 31-28 in the Big 12 championship game Saturday, leaving the Horned Frogs to wait another day to find out if they had already done enough to get into the four-team College Football Playoff.

The Wildcats set up the winning field goal after TCU had the opening possession of overtime and Kendre Miller was stopped short on consecutive plays from inside the 1.

Deuce Vaughn ran for 130 yards and a touchdown and Will Howard threw two TDs for the Wildcats (10-3, No. 10 CFP), who six weeks earlier had jumped out to a 28-10 lead early in the second quarter before TCU scored the game’s last 28 points.

That was one of five games the Horned Frogs (12-1, No. 3 CFP) won when trailing after halftime. But they couldn’t do it again with the chance to guarantee being the first Big 12 team other than Oklahoma to make the playoff.

“We got beat today and now it’s out of our hands. That’s something that we wanted to do is be in control,” TCU quarterback Max Duggan said. “All we can do is kind of watch.”

TCU, the first Big 12 team to complete a regular season undefeated since Texas in 2009, could still get into the playoff. While their case was helped when fourth-ranked Southern California (11-2) lost 47-24 to Utah in the Pac-12 championship game Friday night, the Frogs now have to wait until the final CFP rankings come out Sunday.

“I think we’re certainly deserving. I think the league is one of the best leagues in the country to go through, undefeated in the league, certainly we ought to get in,” first-year TCU coach Sonny Dykes said. “And I don’t think we should be punished for coming to the Big 12 championship game.”

Big 12 Commissioner Brett Yormark said before the game that TCU, with first-year coach Sonny Dykes, already deserved to be in the playoff.

“You look at their strength of schedule. You think about how they’ve performed all year long,” Yormark said. “I think regardless, they should be in, for sure.”

Kansas State coach Chris Klieman agreed after his team reached 10 wins for the first time since 2012, when the Wildcats won the Big 12 title when there was no championship game.

Max Duggan, who went from losing his job as TCU’s starting quarterback going into the season to now being a potential Heisman Trophy finalist, threw for 251 yards and a touchdown, and also ran for 110 yards with an 8-yard score with 1:51 remaining in regulation.

Duggan was stopped just short when stretching for another touchdown when TCU had the ball in regulation, dropping his helmet face-first into the turf when looking up and not seeing a touchdown signaled. The spot was upheld after a replay review, and two plays later the quarterback was standing alone well behind the play with his hands on his helmet when Miller, who had a 6-yard TD earlier, was stopped short to give the ball to K-State.

Vaughn’s 44-yard touchdown, including an open-field move that led to a defensive back falling down yards from him, made it 28-17 and capped a drive set up after Julius Brent intercepted a pass by Duggan in the end zone on the first play of the fourth quarter.

But TCU scored the last 11 points of regulation, including Griffin Kell’s 42-yard field goal with 7 1/2 minute left. The kick ended a drive that Duggan kept alive with a 16-yard pass to Taye Barber on fourth-and-10.

Duggan went to his knees in the end zone, clearly exhausted, after his 8-yard TD run late in regulation. That came right after his 40-yard sprint down the left sideline after scrambling away from pressure on the previous play, though he still had to get up and throw a tying 2-point conversion to tight end Jared Wiley.

He also had runs of 15, 13 and 19 yards on the drive, the longest of those three converting a fourth-and-2 from near midfield. He appeared to throw a 38-yard TD pass after that, but Jordan Hudson was called for offensive pass interference for pushing off to make the catch.

TCU went 92 yards in 13 plays on its opening drive of the game, going ahead 7-0 on Duggan’s 1-yard pass to Barber, but scored only three points its next six drives before halftime.

Kell missed a 55-yard field goal attempt on the Frogs’ next drive, and K-State capitalized on Howard’s 6-yard TD to Ben Sinnott, never to trail again. Howard made it 14-7 with a 1-yard TD run in the second quarter.

Just like 2014, the inaugural season of the four-team playoff, TCU went into its last game before the final rankings at No. 3, with Ohio State fifth.

TCU got left out that time, even after a seven-TD win over Iowa State in its regular-season finale before the Buckeyes beat Wisconsin 59-0 in the Big Ten title game later that day to make the playoff and win the national title. But this year, the Buckeyes (11-1) missed their conference title game after a loss last week to Michigan.