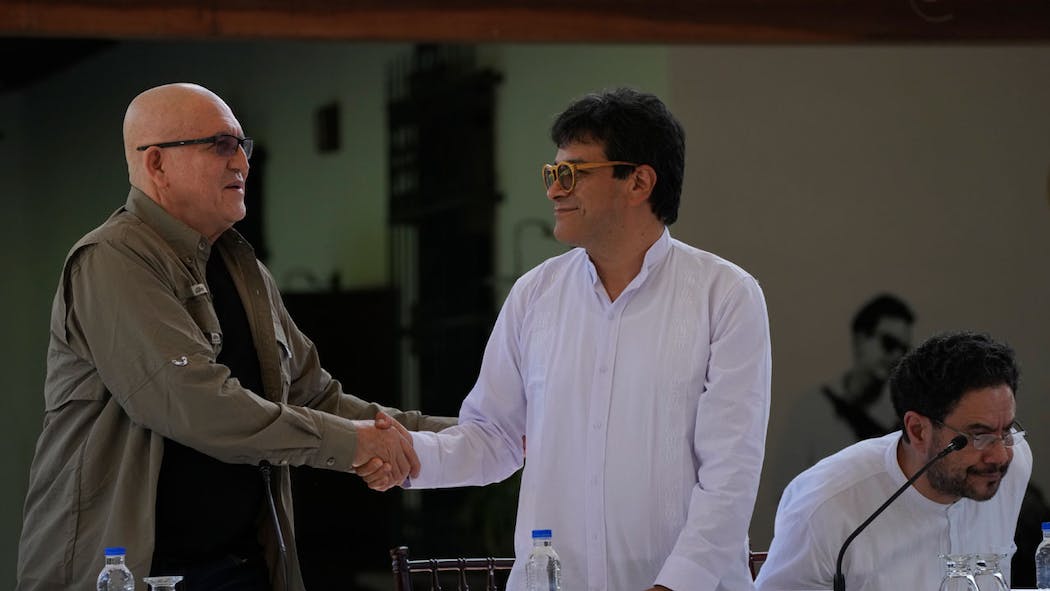 Delegates of Colombia’s government and the nation’s largest remaining guerrilla group met on Tuesday and announced that they will restart peace talks that were suspended in 2018.

After meeting in Venezuela’s capital city, representatives of the Colombian government and the National Liberation Army issued a statement saying a start date for the peace talks would be announced after the first week of November. The statement also added that Norway, Venezuela and Cuba would be “guarantor states” in the talks, and that the participation of civil society groups would be “essential” for the peace talks to succeed.

A place for the talks has not yet been announced, though ELN commander Antonio Garcia suggested that different stages of the negotiations could be held in Cuba, Norway and Venezuela.

The ELN was founded in the 1960s by students, union leaders and priests that drew inspiration from Cuba’s revolution. The group is believed to have around 4,000 fighters in Colombia and is also present in Venezuela where it runs illegal gold mines and drug trafficking routes.

Following a 2016 peace deal between the Colombian government and the Revolutionary Armed Forces of Colombia, the ELN became the nation’s largest remaining guerrilla group. Since then it has increased its activities in territories that were formerly under FARC control. The group is known for staging kidnappings for ransom and attacks on oil infrastructure and has been listed as a terrorist organization by the United States and the European Union.

Colombia’s recently elected President Gustavo Petro is the nation’s first leftist leader and has promised to make peace deals with the ELN and several other armed groups in Colombia. He has shifted away from the strategy of the previous government, which suspended talks with the ELN after the rebels refused to stop attacking military targets.

In a press conference that followed the meeting between both sides, Colombia’s Peace Comissioner Danilo Rueda said that the ELN had shown changes in its behavior which had enabled it to gain the goverment’s trust. Rueda said that the rebel group had recently released hostages and scaled back attacks against the Colombian military.

The ELN did not disclose any details on what it would seek in exchange for laying down its weapons. But the commander, Garcia, hinted that the group was looking for political and economic changes.

“The way to look for peace is not just by thinking about weapons but by attacking the root causes of this conflict which are inequality and the lack of democracy,” Garcia said.

In the 2016 peace deal with the FARC, Colombia gave the rebel group 10 seats in the nation’s congress as well as the possibility of forming its own political party, while rebel leaders who collaborated with a transitional justice system were able to evade prison sentences. Colombia’s government also agreed to financing land titling schemes and rural development projects as part of the peace deal.