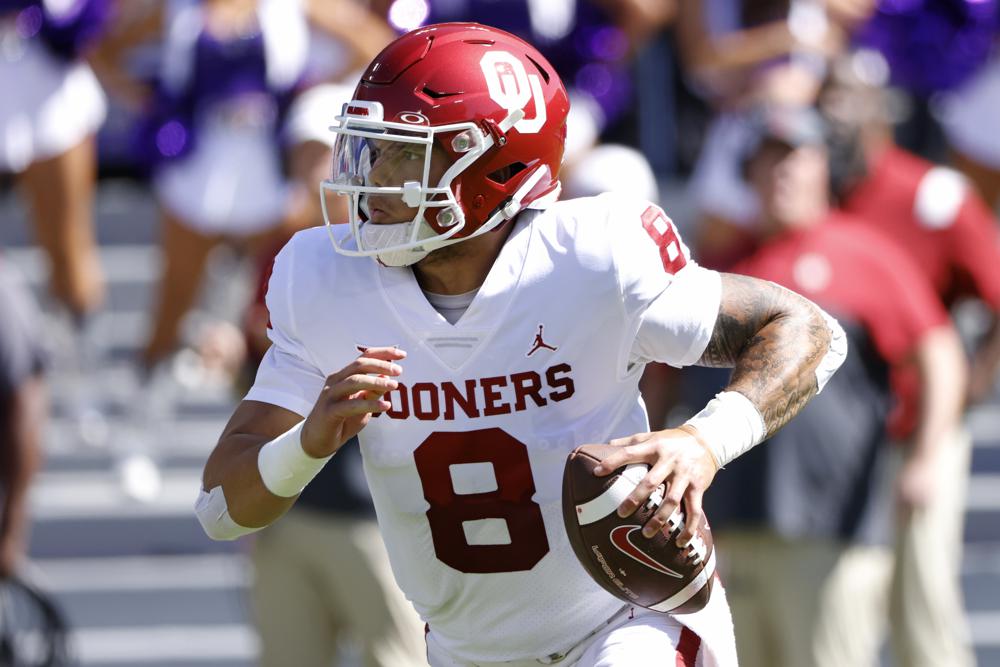 Max Duggan ran 67 yards for one of two touchdowns and threw for three scores, leading TCU to a 55-24 rout of No. 18 Oklahoma on Saturday in a second consecutive loss for new Sooners coach Brent Venables.

OU quarterback Dillon Gabriel was knocked out of the game in the second quarter when he was hit while sliding by TCU linebacker Jamoi Hodge, who was ejected for targeting.

Players had to be separated after Hodge’s hit while Gabriel stayed down for several minutes, surrounded by the medical staff, before the UCF transfer walked off the field on his own. Pittsburgh transfer Davis Beville replaced him.

Harmon flashed a thumbs-up as he was put on the cart in an emotional scene that included linebacker Kelvin Gilliam, a childhood friend and high school teammate, appearing to fight back tears.

When Lincoln Riley shocked the Sooners by leaving for Southern California, they hired their former defensive coordinator after Venables won two national titles in that role at Clemson.

His defense was no match for Duggan and company as Oklahoma lost consecutive regular-season games for just the second time since 1999. The Sooners (3-2, 0-2 Big 12) opened conference with a home loss to Kansas State. It’s the most points Oklahoma has allowed since a 63-28 loss to LSU in the 2019 national semifinals.

TCU led 41-17 at halftime with 479 yards while finishing with 668 yards in coach Sonny Dykes’ Big 12 debut after four seasons at crosstown rival SMU.

Kendre Miller ran 69 yards for a touchdown to put TCU up 48-17 early in the second half and finished with 136 yards and two touchdowns on 13 carries. The active FBS career leader in yards per carry increased his mark by averaging 10.5 yards.

Duggan simply outran the OU defense on the long score, then added a 35-yard run on the final TD drive for the Horned Frogs, shortening the run by sliding to keep the clock running with TCU up by 31 points.

A 2-yard scoring run by Duggan soon after made it 55-17, finishing his day in the third quarter.

Both teams had committed just one turnover apiece coming in before Marvin Mims fumbled on the third play of the game after Oklahoma won the toss and decided to take the ball instead of deferring. Duggan’s 19-yard scoring pass to Savion Williams finished a 46-yard drive to the first points.

When the Sooners weren’t being penalized for defensive pass interference (three times in the first quarter), they were leaving receivers wide open in the secondary. Taye was alone on his long TD, as was Gunnar Henderson on a 62-yard score.

Jovantae Barnes had 100 yards rushing and two touchdowns for the Sooners, while Gabriel and Beville both were 7 of 16 without a touchdown or interception.

Oklahoma: This is the second time in three seasons the Sooners have started 0-2 in the Big 12. They rallied to win the conference in the pandemic-shortened 2020 season, beating Iowa State in the title game. But Oklahoma was never manhandled like this.

TCU: The Horned Frogs averaged 10.2 yards per play while building their big halftime lead and finished at 8.9 after coming in second nationally at 8.1 yards per play.

Oklahoma: The Sooners come back to the Dallas-Fort Worth area for the Red River rivalry against Texas at the Cotton Bowl next Saturday.

TCU: The Horned Frogs will go for their first 2-0 start in the Big 12 since 2017 with a visit to resurgent Kansas next Saturday.