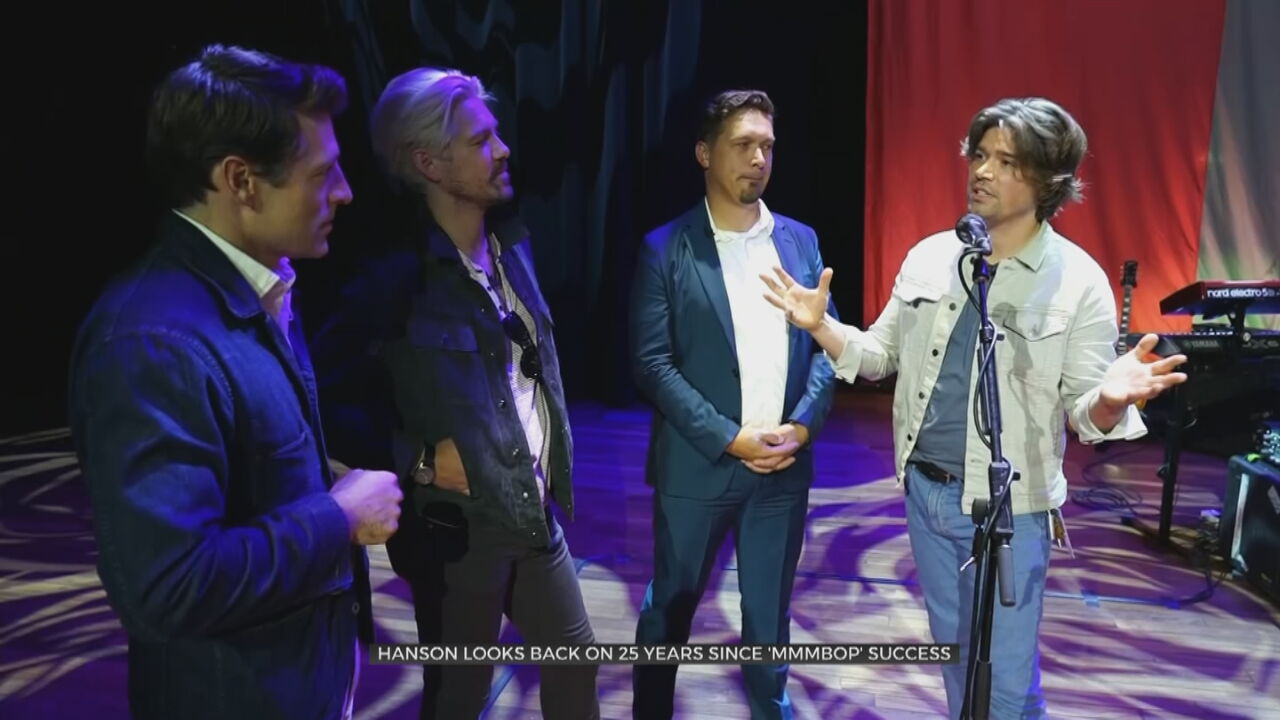 If you were around in 1997, you simply could not miss it: "MMMBop" was everywhere. The song, off Hanson's debut "Middle of Nowhere," helped sell more than 10 million albums, and knocked the Notorious BIG off the top of the charts. The song climbed to #1 in 27 countries, and turned the kid- musicians into true global celebrities.

All these 25 years later, no one is more aware of the success of "MMMBop" than the three brothers who created it.

"We all know how catchy the song is," said Isaac Hanson. "It worked."

"It was a phenomenon," said Zac. "It was, you know, a cultural wave, tsunami of some kind."

Taylor added, "Took on its own life."

"CBS Mornings" co-host Tony Dokoupil said, "It's been described as sounding like a song made in a lab specially designed to capture the attention of the entire world."

"People mostly just feel that way and say those things just out of elation," said Taylor "'Oh, you're a teen idol, you're a heartthrob,' those kinds of things. But for you, you're like, 'That's great, but we wrote this.'"

To hear Hanson perform "MMMBop," click on the video player below:

Growing up in Tulsa, Oklahoma, the brothers formed a band and bonded around a collection of rock 'n' roll hits from 1958. "It was one of these Time-Life compilations, and it was advertised on TV," said Isaac.

"Very naturally from that, we started emulating," said Taylor. "I mean, songwriting starts with emulating something. And then all of a sudden, you're singing along, and you're making it your own."

The chorus for "MMMBop" popped into their heads while at work on another song entirely.

Zac said, "We were trying to write a background part for a song called 'Boomerang,' [which] was already syncopated. Bing bang, hit me like a boomerang. Light turns green, blood starts flowin'. And for some reason, we thought, 'That's not complicated enough. We should add, like, a complicated part underneath it!'"

With the two parts together, Isaac admitted, "It's just a lotta gumbo!"

They ended up separating the two songs, and a year or two later, matched that irresistible tune to an idea … and a lesson you might have missed.

Dokoupil asked, "What is an MMMBop?"

Zac added, "It's saying, look, like that (snaps fingers) you're gonna be at the end of your life. You're gonna be past this moment. Be conscious that every choice you choose not to take on is one you may not have the opportunity to make again."

You have so many relationships in this life

Only one or two will last

You go through all the pain and strife

Then you turn your back and they're gone so fast

And they're gone so fast, yeah

Oh, so hold on the ones who really care

In the end they'll be the only ones there

And when you get old and start losing your hair

Can you tell me who will still care

Dokoupil noted that, when they wrote the song, Isaac was 13, Taylor 11, and Zac, 9. "And you're singing about the ravages of time?"

"Yeah!" Zac said, laughing. "Well, we were already getting these messages from our parents. 'Hey, you know, you've just gotta be you. And people won't always understand you.' And it really connected."

Though the band recorded other hits ("Where's the Love," "This Time Around," "If Only"), nothing could match the commercial triumph of "MMMBop." Yet, the brothers did find a loyal base of fans and a new path to success through their own independent record label, 3CG Records.

Taylor said, "At that moment in our life you're saying, 'You know what? We're gonna decide to claim what success means. This for us is to own our own destiny, to talk to those fans, and let's see if we could have a #1 Billboard independent album.' And we did."

"It's what we've been doing ever since," added Isaac.

"CBS Mornings" caught up with the band at Nashville's legendary Ryman Auditorium, while they're on a world tour for their latest album, "Red Green Blue," featuring five songs from each brother.

Zac said, "I don't think there's a lot of bands like that where every member sings and plays and writes and kind of could be doing it completely on their own, but choose to do it together."

To watch Hanson perform "Write You a Song," from the album "Red Green Blue," click on the video player below:

It's that bond, and that sound, that continues to attract fans, who still pack into theaters to hear the band perform their latest and greatest. Twenty-five years after they first harmonized about holding on to those who care, the Hanson brothers are still living those words.

Zac said, "We're a band that probably is not much more understood than we were misunderstood when we started out."

"Why do you say that?" Dokoupil asked.

"Because I think, just like we were influenced by music that wasn't from our time, we are a band kind of happily outside of our genre. Because it's really all just about what we're saying. And the story is what matters, the message behind the song.