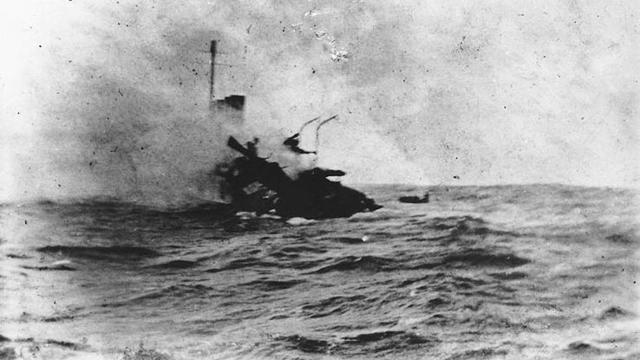 Divers off the southwestern coast of England have reported finding a World War I U.S. Navy destroyer that was sunk by a German submarine more than a century ago. The USS Jacob Jones, which was hit by a torpedo on December 6, 1917 in the English Channel, holds the distinction of being the first U.S. Navy destroyer ever to be lost to enemy action, according to the Naval History and Heritage Command (NHHC).

Sixty-four of the destroyer's 110 officers and crew died when the ship went down.

Darkstar, a group of expert divers from the U.K., discovered the wreckage about 400 feet underwater and 60 miles south of Newlyn, Cornwall, dive team member Steve Mortimer said in a Facebook post.

The team said they did not disturb the site and had contacted the U.S. Department of State to alert them of their discovery.

The USS Jacob Jones was patrolling off the Virginia coast when war broke out between the United States and Germany on April 6, 1917, according to the NHHC. The ship was ultimately deployed to escort supply convoys around the United Kingdom and would rescue hundreds of survivors of British warships hit by enemy fire — including picking up 305 survivors from the torpedoed British cruiser Orama.

But on December 6, 1917, the ship was struck by a German torpedo about 20 miles east of Start Point, England. According to the NHHC, as the stern sank, Commander David W. Bagley ordered all life rafts launched and the ship abandoned. Eight minutes after being hit by the torpedo, the destroyer sank with two officers and 62 crew members still onboard. The commander of the attacking submarine, Kapitan Hans Rose, took two wounded survivors prisoner, according to the NHHC's account. Meanwhile, two British warships launched rescue operations and a total of 39 men were saved, out of the 103 who had been on board.

Lieutenant Stanton F. Kalk, who was the officer-of-the-deck when the torpedo struck, displayed "extraordinary heroism" in helping men out of the water and into life rafts and boats, the NHHC said. He died of exhaustion and exposure, and was posthumously awarded the Navy's Distinguished Service Medal. Two Navy destroyers were later named after Kalk.

Among the 39 survivors, according to the dive team, was Lt Cdr Norman Scott, who went on to be killed in action in World War II, ultimately receiving the Medal of Honor. Diver Dominic Robinson said the team had to overcome a strong, shifting current to find the wreckage of the iconic warship.

"Without doubt this is one of the most satisfying dives I've done in a while," he wrote on Facebook. "Identifying a wreck of historical significance is always going to be a brilliant experience but doing it at over 100 metres and so far out at sea magnifies that."

The discovery comes less than two months after a U.S. Navy destroyer escort sunk during World War II was found about 23,000 feet below sea level off the Philippines, making it the deepest shipwreck ever located.