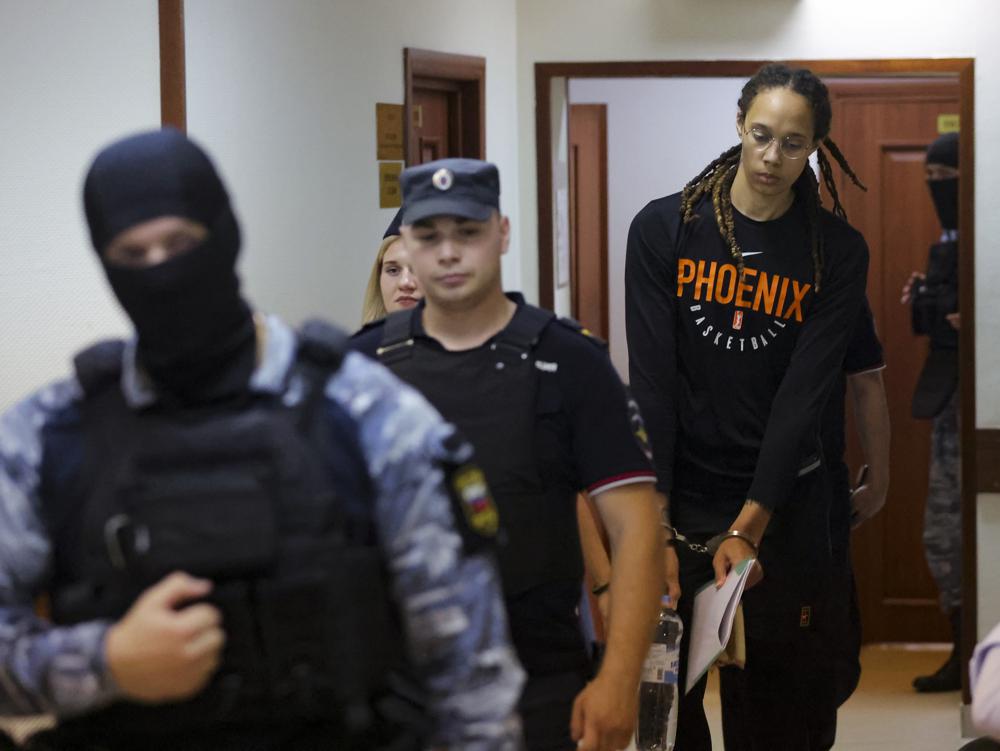 Griner was arrested for carrying vape cartridges containing with marijuana in a Moscow airport in February amid soaring tension between Washington and Moscow, and just before Russian leader Vladimir Putin launched his ongoing assault on Ukraine.

The athlete was on her way to Yekaterinburg, in western Russia, to play for a local team during the WNBA's off-season.

Griner pleaded guilty to the charge but sought leniency, saying that she packed the cartridges inadvertently and marijuana was prescribed to her by a doctor in the U.S. to help her cope with pain from injuries sustained during her basketball career. In early August, a court in the Moscow region found her guilty.

Before her trial began in July, the State Department designated her as being "wrongfully detained," moving her case under the supervision of its special presidential envoy for hostage affairs — effectively the U.S. government's chief hostage negotiator.

Secretary of State Antony Blinken said the U.S. had put forward a "substantial proposal" to Russia for a potential prisoner exchange. According to media reports, the potential swap would see Griner and another U.S. national, Paul Whelan, swapped in exchange for Viktor Bout, a convicted arms dealer nicknamed the "Merchant of Death" who has been in U.S. custody for over a decade.

The Kremlin initially gave a measured response, indicating that no swap would be considered until there was a verdict in Griner's case. Moscow also warned the U.S. against exerting public pressure in an effort to secure the athlete's release. Dmitry Peskov, the presidential spokesperson, repeatedly said that the talks should go on behind closed doors, through "established channels."

Over the weekend, however, Russian officials confirmed that negotiations were underway and acknowledged that Moscow was indeed seeking an exchange for Bout.

"The discussion of the very sensitive topic of the exchange of imprisoned citizens of Russia and the United States is taking place within the channels determined by our presidents," Alexander Darchiev, a high-profile Russian diplomat, told state news agency TASS on Saturday.

"The personalities mentioned above are indeed being considered," he said referring to the reports about Griner, Whelan and Bout.

"The Russian side has been seeking the release of Viktor Bout for a long time," Darchiev noted.