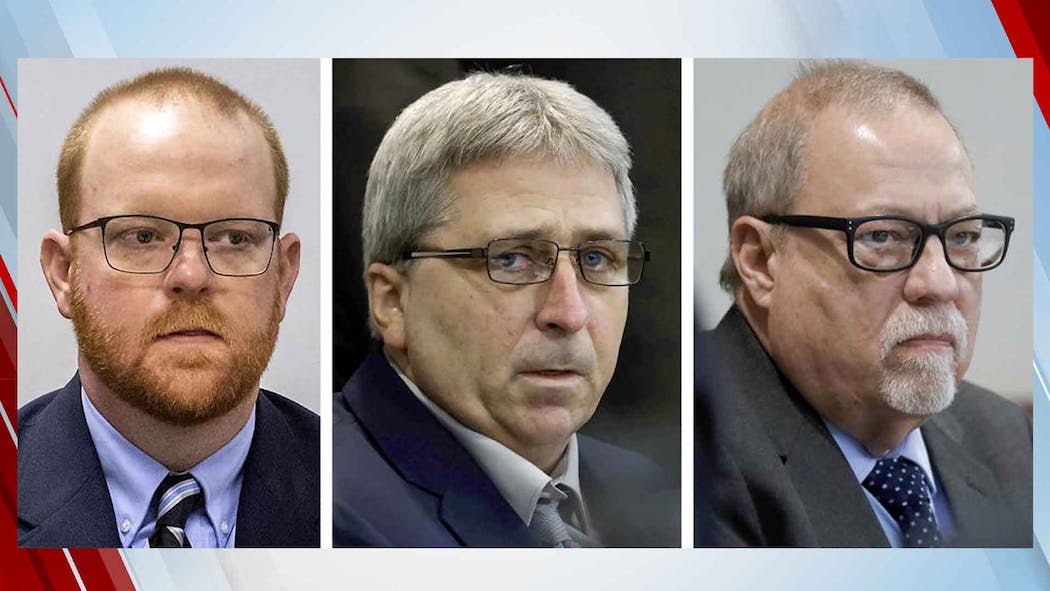 Months after they were sentenced to life in prison for murder, the three white men who chased and killed Ahmaud Arbery in a Georgia neighborhood faced a second round of criminal penalties Monday for federal hate crimes committed in the deadly pursuit of the 25-year-old Black man.

U.S. District Court Judge Lisa Godbey Wood scheduled back-to-back hearings to individually sentence each of the defendants, starting with Travis McMichael, who blasted Arbery with a shotgun after the street chase initiated by his father and joined by a neighbor.

Arbery’s killing on Feb. 23, 2020, became part of a larger national reckoning over racial injustice and killings of unarmed Black people including George Floyd in Minneapolis and Breonna Taylor in Kentucky. Those two cases also resulted in the Justice Department bringing federal charges.

When they return to court Monday in Georgia, McMichael, his father Greg McMichael and neighbor William “Roddie” Bryan face possible life sentences after a jury convicted them in February of federal hate crimes, concluding that they violated Arbery’s civil rights and targeted him because of his race. All three men were also found guilty of attempted kidnapping, and the McMichaels face additional penalties for using firearms to commit a violent crime.

Whatever punishments they receive in federal court could ultimately prove more symbolic than anything. A state Superior Court judge imposed life sentences for all three men in January for Arbery’s murder, with both McMichaels denied any chance of parole.

All three defendants have remained jailed in coastal Glynn County, in the custody of U.S. marshals, while awaiting sentencing after their federal convictions in January.

Because they were first charged and convicted of murder in a state court, protocol would have them turned them over to the Georgia Department of Corrections to serve their life terms in a state prison.

In a court filings last week, both Travis and Greg McMichael asked the judge to instead divert them to a federal prison, saying they won’t be safe in a Georgia prison system that’s the subject of a U.S. Justice Department investigation focused on violence between inmates.

Arbery’s family has insisted the McMichaels and Bryan should serve their sentences in a state prison, arguing a federal penitentiary wouldn’t be as tough. His parents objected forcefully before the federal trial when both McMichaels sought a plea deal that would have included a request to transfer them to federal prison. The judge ended up rejecting the plea agreement.

A federal judge doesn’t have the authority to order the state to relinquish its lawful custody of inmates to the Federal Bureau of Prisons, said Ed Tarver, an Augusta lawyer and former U.S. attorney for the Southern District of Georgia. He said the judge could request that the state corrections agency turn the defendants over to a federal prison.

The McMichaels armed themselves with guns and jumped in a truck to chase Arbery after spotting him running past their home outside the port city of Brunswick on Feb. 23, 2020. Bryan joined the pursuit in his own truck, helping cut off Arbery’s escape. He also recorded cellphone video of Travis McMichael shooting Arbery at close range as Arbery threw punches and grabbed at the shotgun.

The McMichaels told police they suspected Arbery had been stealing from a nearby house under construction. But authorities later concluded he was unarmed and had committed no crimes. Arbery’s family has long insisted he was merely out jogging.

Still, more than two months passed before any charges were filed in Arbery’s death. The McMichaels and Bryan were arrested only after the graphic video of the shooting leaked online and the Georgia Bureau of Investigation took over the case from local police.

During the February hate crimes trial, prosecutors fortified their case that Arbery’s killing was motivated by racism by showing the jury roughly two dozen text messages and social media posts in which Travis McMichael and Bryan used racist slurs and made disparaging comments about Black people. A woman testified to hearing an angry rant from Greg McMichael in 2015 in which he said: “All those Blacks are nothing but trouble.”

Defense attorneys for the three men argued the McMichaels and Bryan didn’t pursue Arbery because of his race but acted on an earnest — though erroneous — suspicion that Arbery had committed crimes in their neighborhood.