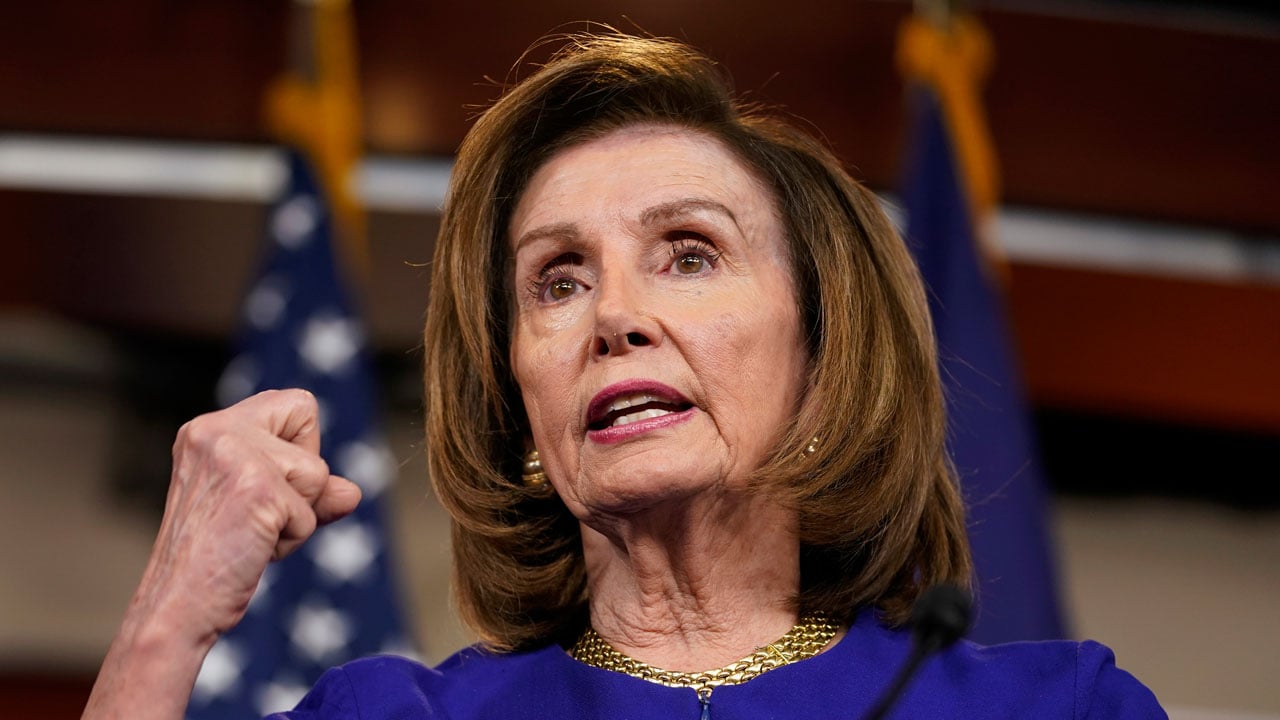 U.S. House Speaker Nancy Pelosi arrived in Taiwan on Tuesday night, becoming the highest-ranking American official to visit the self-ruled island that is claimed by China in 25 years.

Pelosi’s visit has triggered increased tensions between China and the United States. China claims Taiwan as part of its territory, to be annexed by force if necessary, and views visits by foreign government officials as recognition of the island’s sovereignty.

China had warned of “resolute and strong measures” if Pelosi went ahead with the trip. The Biden administration did not explicitly urge her to call it off, while seeking to assure Beijing it would not signal any change in U.S. policy on Taiwan.

THIS IS AN AP BREAKING NEWS UPDATE. CBS News' earlier story is below.

U.S. House Speaker Nancy Pelosi was in Malaysia on Tuesday for the second leg of an Asian tour that's been overshadowed by an expected stop in Taiwan, which would escalate tensions with China. Beijing claims the self-ruled island as its own territory.

The plane carrying Pelosi and her delegation touched down at an air force base amid tight security. She called on lower house Speaker Azhar Azizan Harun in Parliament and adjourned for a luncheon meeting with Prime Minister Ismail Sabri Yaakob.

While there have been no official announcements, local media in Taiwan reported that Pelosi would head for Taipei from Malaysia, which would make her the highest-ranking elected U.S. official to visit Taiwan in more than 25 years. The United Daily News, Liberty Times and China Times - Taiwan's three largest national newspapers - cited unidentified sources as saying she would fly to Taipei.

The U.S. military plane that's been carrying Pelosi's delegation made a sharp turn northward after heading due east from Kuala Lumpur for several hours. That put the plane on a trajectory to land in Taipei from the east — if that's indeed the destination.

CBS News had no confirmation that Pelosi was on the plane or that she was heading to Taiwan, but a senior administration official said more should be known about her travel plans by "mid-morning," which would track with a mid-morning landing in Taipei.

That flight path takes the plane far from the Chinese mainland, avoiding the South China Sea and the Taiwan Strait, where Chinese warplanes have reportedly been flying Tuesday morning.

China, which regards Taiwan as a renegade province to be annexed by force if necessary, has warned of repercussions, saying its military will "never sit idly by" if Pelosi pushes ahead with the visit. China's threats of retaliation have driven concerns of a new crisis in the Taiwan Strait, which separates the two sides, that could roil global markets and supply chains.

Chinese foreign ministry spokesperson Hua Chunying said Tuesday that Bejing has been in communication with Washington over Pelosi's expected Taiwan visit, according to Reuters.

Agence France-Presse reports that Chunying also warned that the U.S. would "pay the price" if Pelosi visits Taiwan.

"The US side will bear the responsibility and pay the price for undermining China's sovereign security interests," AFP quotes him as saying.

Kremlin spokesman Dmitry Peskov warned Tuesday that such a Pelosi stop in Taiwan would be "extremely provocative," adding that it would "exacerbate the situation in the region and fuel tensions."

Speaking in a call with reporters, Peskov reaffirmed Russia's "absolute solidarity" with China, noting that the issue of Taiwan is very sensitive for Beijing.

"Instead of dealing with this sensitivity with respect, the U.S. has regrettably chosen the path of confrontation," he added. "It will bring no good, we can only express regret."

The White House on Monday decried Beijing's rhetoric, saying the U.S. has no interest in deepening tensions with China and "will not take the bait or engage in saber rattling."

White House National Security Council spokesperson John Kirby underscored that the decision on whether to visit the self-ruled island was ultimately Pelosi's. He noted that members of Congress have routinely visited Taiwan over the years.

Kirby said administration officials are concerned that Beijing could use the visit as an excuse to take provocative retaliatory steps, including military action such as firing missiles in the Taiwan Strait or around Taiwan, or flying sorties into the island's airspace and carrying out large-scale naval exercises in the strait.

"Put simply, there is no reason for Beijing to turn a potential visit consistent with long-standing U.S. policy into some sort of crisis or use it as a pretext to increase aggressive military activity in or around the Taiwan Strait," Kirby said.

U.S. Secretary of State Antony Blinken also urged China to "act responsibly" in the event that Pelosi proceeds with the visit.

"If the speaker does decide to visit, and China tries to create some kind of a crisis or otherwise escalate tensions, that would be entirely on Beijing," he told reporters at U.N. headquarters in New York. "We are looking for them, in the event she decides to visit, to act responsibly and not to engage in any escalation going forward."

U.S. officials have said the military would increase its movement of forces and assets in the Indo-Pacific region if Pelosi visits Taiwan. U.S. Navy aircraft carrier USS Ronald Reagan and its strike group were in the Philippine Sea on Monday, according to officials who spoke on the condition of anonymity to discuss military operations.

The Reagan, the cruiser USS Antietam and the destroyer USS Higgins left Singapore after a port visit and moved north to their homeport in Japan. The carrier has an array of aircraft on board, including F/A-18 fighter jets and helicopters, as well as sophisticated radar systems and other weapons.

Taiwan and China split in 1949 after the Communists won a civil war on the mainland. The U.S. maintains informal relations and defense ties with Taiwan even as it recognizes Beijing as the government of China.

Beijing sees official American contact with Taiwan as encouragement to make the island's decades-old de facto independence permanent, a step U.S. leaders say they don't support. Pelosi, head of one of three branches of the U.S. government, would be the highest-ranking elected American official to visit Taiwan since then-Speaker Newt Gingrich in 1997.

Pelosi kicked off her Asian tour in Singapore on Monday but her purported visit to Taiwan has sparked jitters in the region.

Singapore Prime Minister Lee Hsien Loong "highlighted the importance of stable U.S.-China relations for regional peace and security" during talks with Pelosi, the city-state's foreign ministry said. This was echoed by Japan's Foreign Minister Yoshimasa Hayashi in Tokyo, who said stable ties between the two rival powers "are extremely important for the international community as well."

The Philippines urged U.S. and China to be "responsible actors" in the region. "It is important for the U.S. and China to ensure continuing communication to avoid any miscalculation and further escalation of tensions," said Foreign Affairs spokesperson Teresita Daza.

China has been steadily ratcheting up diplomatic and military pressure on Taiwan. China cut off all contact with Taiwan's government in 2016 after President Tsai Ing-wen refused to endorse its claim that the island and mainland together make up a single Chinese nation, with the Communist regime in Beijing being the sole legitimate government.

On Thursday, Pelosi is to meet with South Korean National Assembly Speaker Kim Jin Pyo in Seoul for talks on security in the Indo-Pacific region, economic cooperation and the climate crisis, according to Kim's office. Pelosi is also due to visit Japan, but it is unclear when she heading there.