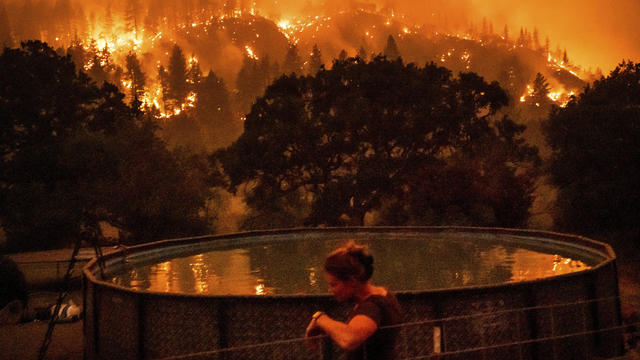 The McKinney Fire in the Klamath National Forest in Siskiyou County had burned through 51,468 acres as of Sunday morning and remained 0% contained, according to Cal Fire.

The wildfire, now California's largest so far this year, began on Friday afternoon in the Klamath National Forest near the California- Oregon border and led to the shut down of a portion of Highway 96, Cal Fire officials said.

Drought conditions in the area have led to extremely dry, receptive fuels that have aided in the wildfire's quick spread as well as strong winds and dry lighting, fire officials said. On Sunday, the National Weather Service issued red-flag warnings for the area due to the threat of dry lightning and strong winds that can cause the fire to spread in any direction and is "extremely dangerous" for firefighters.

As firefighters struggle to contain the blaze they are also dealing with three additional, smaller fires in the county- the China 2 Fire, the Evans Fire and Kelsey Creek fires.

The Siskiyou County Sheriff's Office said that the McKinney and China 2 Fire became active overnight and said their priority on Sunday was lifesaving efforts and protecting the property of residents who were evacuated.

"Crews were actively engaged in structure protection overnight, especially in the Klamath River area. Little progression was observed on the fire's edge closest to Yreka City," the sheriff's office said on Facebook.

On Saturday, California Gov. Gavin Newsom declared a state of emergency for Siskiyou County to utilize more resources to battle the blaze. Newsom confirmed an undisclosed amount of homes had been destroyed due to the wildfire and that 2,000 reidents in the county were under evacuation orders.