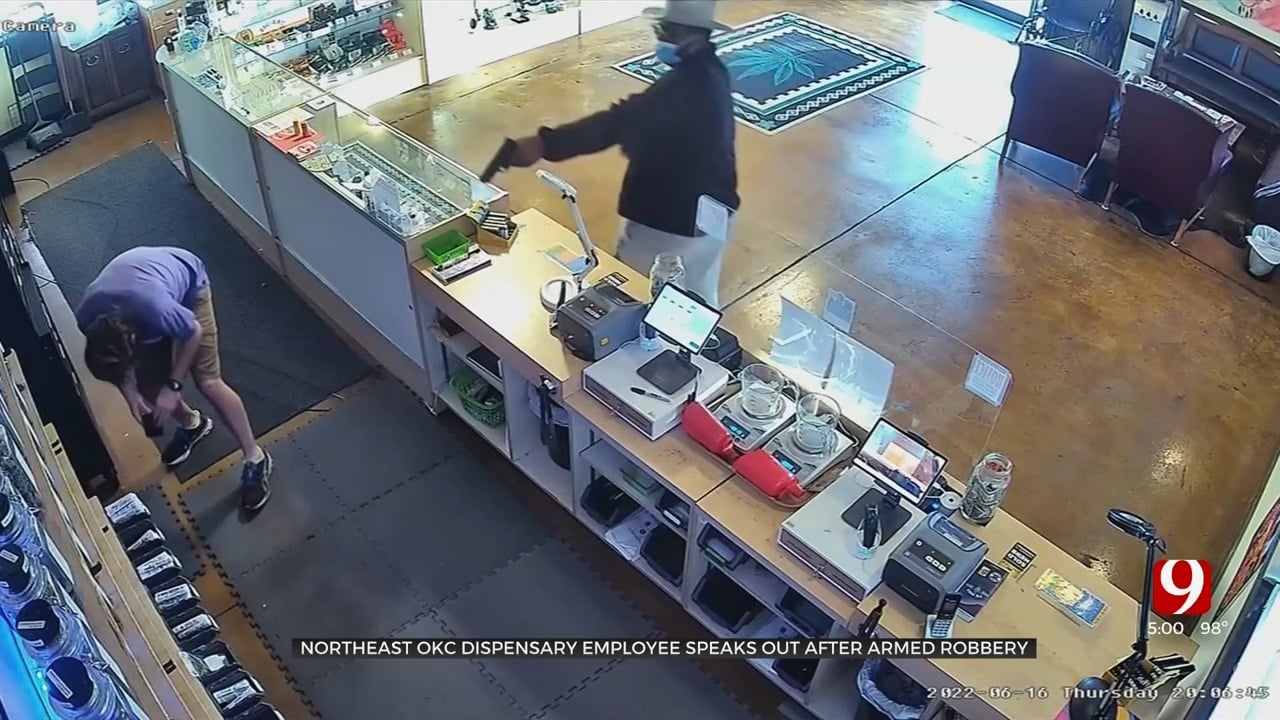 One week after a metro dispensary was robbed, security footage of the crime was released by Oklahoma City police. Authorities said the suspect got away with thousands of dollars.

Big Buds Cannabis Co. gave News 9 the complete security footage. The store general manager’s, Zachary Seresinhe, said the suspect greeted the employee with a smile before he pulled out a gun.

The suspect was inside the store for just over six minutes. During that time, he took nearly $20,000 in cash with him as he walked out the door.

The suspect also left behind a terrified employee and customer who unknowingly walked in the middle of the robbery.

"I don't think there's one emotion to summation it. It's just a lot of different ones," Seresinhe said. "Lots of fear and now anger, frustration.”

Emotions still run high a week after the suspect walked into the dispensary. It was a visit that initially began like any other.

"I mean he walked in and was friendly for the first four or five seconds,” Seresinhe said. "He was like, ‘Hey man, how's it going?’ He gets up just a few feet, and then pulls the gun out.”

The budtender's shock can be seen in he realizes he's staring down the barrel of a gun. The suspect then handed him tape to tape his ankles before he let the employee know the gun is loaded and fired a shot.

"It initially hit the mat here. This was where it impacted," Seresinhe said. “That could have easily been the inside of his leg.”

The bullet ricocheted off the ground and into the floorboard. After a customer walked into the store, the suspect made her tape her ankles together, as well.

He then told her to fill a garbage bag with marijuana.  As she did that, the employee was taken to a full safe in the back.

"The owner had intended to pay taxes, so there was extra money in the safe,” Seresinhe said. “We had all the envelopes from last month's taxes in the bottom that he took. Usually, there's not that much in there."

The store owner said the suspect got away with nearly $20,000 and a bag full of marijuana. The suspect is still on the run.

Dispensary employees reopened the shop the next day. Some have started to take extra precautions.

"For me, what it took was going to the gun range on and shooting for a while to get used to a gun again,” Seresinhe said.

Both the employee and customer didn't have any injuries.