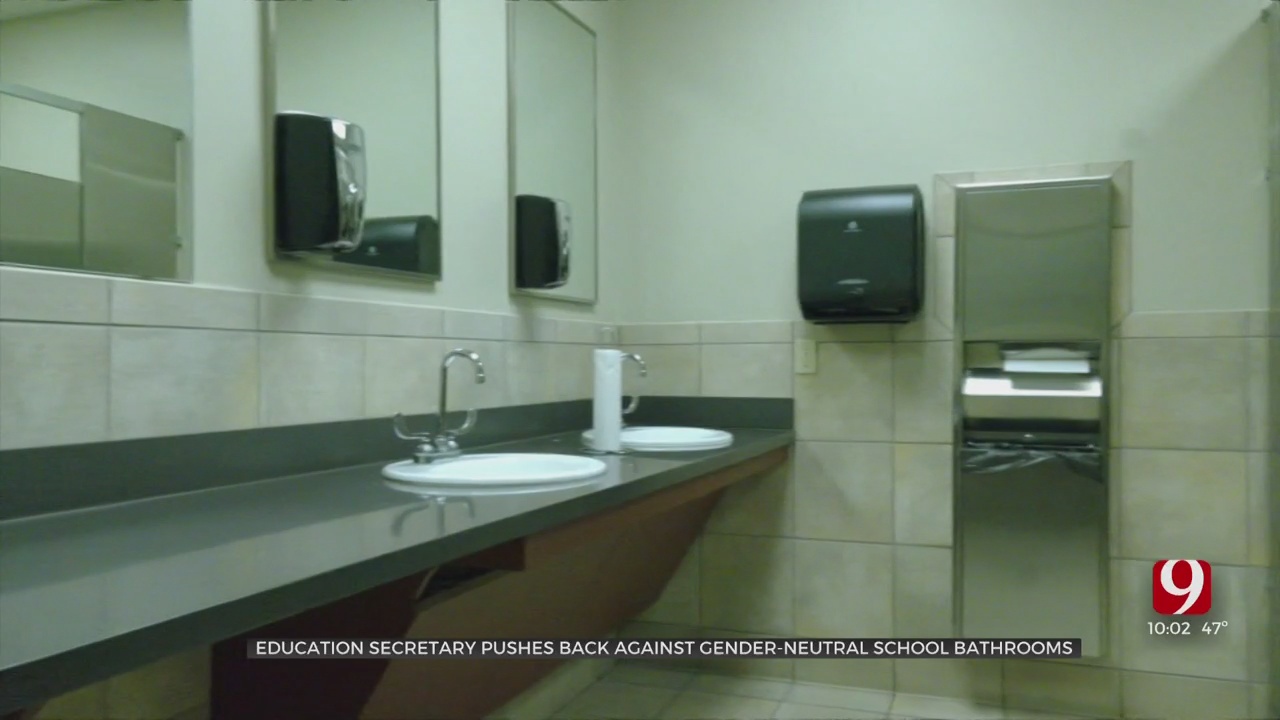 Oklahoma’s Secretary of Education asked the state Attorney General to “stop” what he called a “dangerous” bathroom policy at Stillwater Public Schools.

Ryan Walters, who is currently running for statewide office, posted about the request Friday on Twitter.

Walters also sent a letter to members of Stillwater’s Board of Education urging them to “make it so that your students only use the bathroom of their God-given natural sex.”

“Biological males should not receive unrestricted access to women’s restrooms,” Walters wrote to SPS board members Friday. “I am asking you to work with your fellow board members to make it so that your students only use the bathroom of their God-given natural sex.”

Walters told News 9 that he sees the debate surrounding gender identity and bathrooms as a student safety issue.

He said parents have told him their daughter doesn't use the bathrooms at school because they feel uncomfortable.

“It’s common sense. It doesn’t jive with Oklahoma values,” Walters said. “Biological males should not be in a bathroom with underage girls. We’re talking about young students. The genders should be separated in the bathroom.”

Walters said the policy at issue is one included a letter Interim Superintendent Gay Washington sent to district families on March 31, following a board meeting.

Washington’s letter cited the SPS policy DA, the district’s Title IX policy, which states the district prohibits discrimination by gender identity. A district spokesperson said SPS does not have a policy directing students to a specific bathroom.

In her letter, Washington said each school facility has at least one gender-neutral bathroom, and said the district has never received a report of “any inappropriate restroom behavior related to a student’s gender identity.”

The U.S. Department of Education confirmed Title IX protects students from discrimination based on gender identity, an individual’s personal sense of gender.

“These protections extend to use of school restrooms, allowing individuals to use the restroom corresponding to their gender identity,” Washington wrote. “Any student uncomfortable using the traditional male/female restrooms at any site may utilize individual-use facilities.”

Walters sent a second letter Friday to Attorney General John O’Connor asking him to “order” the district to “stop putting children in grave danger with their bathroom policies.”

O’Connor sent a letter to Superintendent Washington Friday. However, it did not reference Walters’ request.

Instead, it appeared to be offering a legal opinion to the district.

“It has come to my attention that the Stillwater Public Schools has likely been informed by the State Department of Education that public schools are required to permit biological males into women’s restrooms based on their gender identity, and vice versa. This is not accurate,” O’Connor wrote in the letter.

Walters, a candidate for State Superintendent of Public Instruction, said he plans to talk about the issue of gender identity and school bathrooms heading into the election.

“I’m talking about running for state superintendent and I’m dedicated to our schools not going ‘woke,'" Walters said.

Stillwater Public Schools sent a statement to News 9 addressing Walters’ Friday letter. The district said it “would welcome clear expectations and directives from the state regarding this issue–not only for the benefit of our district, but also the benefit of our peer districts.”

2023 Teacher Of The Year Finalists Announced