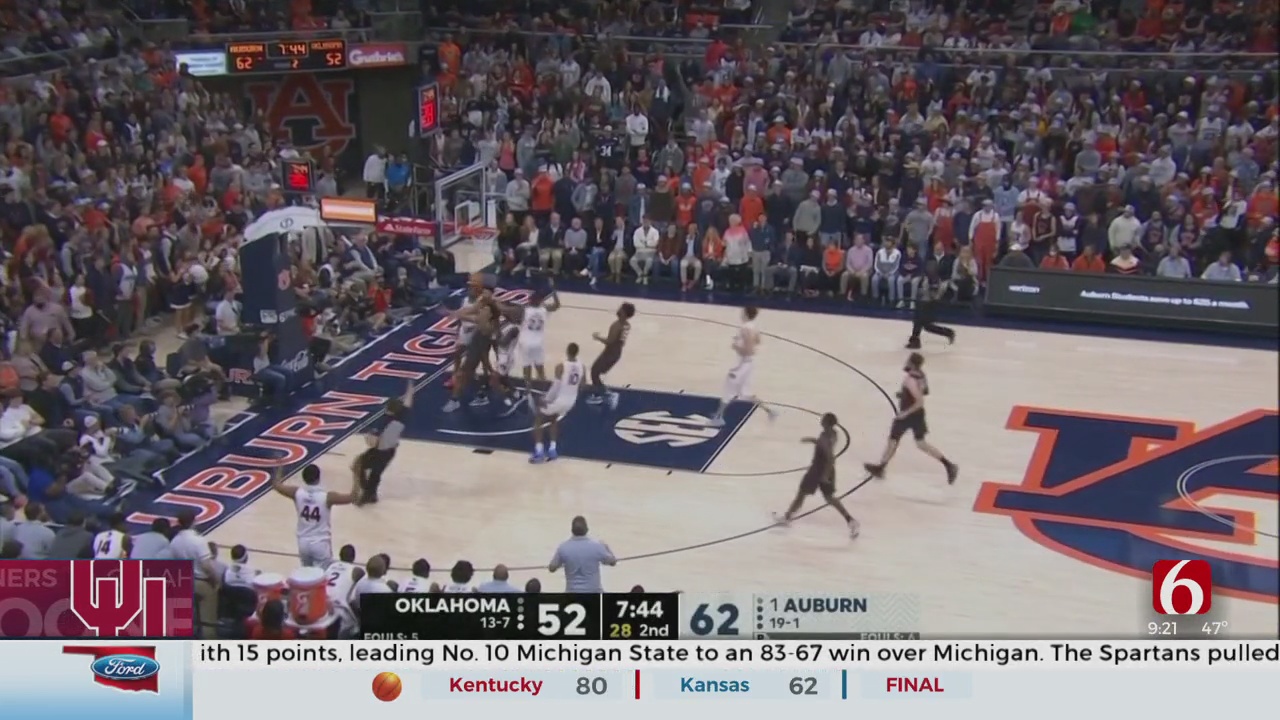 Jabari Smith and Auburn made much easier work of their second game as the nation’s top-ranked team.

Smith bounced back from a rough shooting night with 23 points and 12 rebounds and Walker Kessler scored 21 to lead No. 1 Auburn to an 86-68 victory over Oklahoma on Saturday.

“Knowing how we played against Missouri, we were just ready to bounce back,” Smith said.

The Tigers (20-1) built a big lead, lost most of it and then dominated the final minutes for their nation-leading 17th consecutive win. The Sooners (13-8) visited as part of the Big 12/SEC Challenge.

“We had an advantage in the front line and we took advantage of our advantage,” said Auburn coach Bruce Pearl, who agreed to a new contract on the eve of the game. “Jabari Smith and Walker Kessler were dominant in there, and that was really a key.”

Smith was just 2-of-15 shooting for five points in a 55-54 win over Missouri Tuesday. The freshman, a potential No. 1 overall draft pick, and Kessler took over this one. Afterward, Pearl said it’s “the best front-court I’ve ever coached.”

The 7-foot-1 Kessler was 9 of 11 from the floor, grabbed nine rebounds and blocked four shots. He also hit his fourth and fifth 3-pointers of the season.

“They never told me not to shoot. They told me to shoot every time,” Kessler said. “As a shooter and as a player, it helps you a lot, puts confidence in you. You’re bound to make a couple.”

K.D. Johnson scored 13 after producing the last five points in the Missouri win.

But, he added, “We had five unacceptable turnovers away from the bench against the press. Unacceptable.”

Auburn pushed a 12-point halftime lead to 14 coming out of the locker room.

Oklahoma whittled it down to 50-47 on Gibson’s baseline layup with 12:24 to play. Gibson also fueled the aborted comeback with a 3-pointer, drawing a foul and converting the four-point play at the foul line.

It was all Auburn from there, including Kessler’s second 3.

“Obviously it’s frustrating,” Goldwire said. “We’ve played with Baylor, Kansas and now Auburn. I think those are all games that we could have won that didn’t go our way.”

Oklahoma lost for the second time this season to a No. 1 team, including an 84-74 defeat to currently fourth-ranked Baylor on Jan. 4. Didn’t get its first rebound for nearly 6 minutes to open the game and went 9:21 without a basket during another first-half stretch.

Auburn withstood every challenge in its first home game as a No. 1 team. Dominated the boards 41-29 and made 22 of 26 free throws (84.6%). Scored more against Oklahoma than any other team this season.

It’s not a conference game, but Pearl emphasized that “this Challenge matters.

“It matters on Selection Sunday,” he said. “What we did, being one of the top teams in the SEC, we just held serve.”