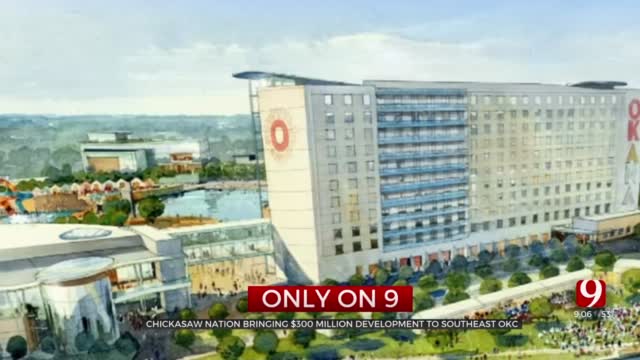 The newly-opened First Americans Museum in southeast Oklahoma City kicked off big plans for the land surrounding the site. Chickasaw Nation Governor Bill Anoatubby on Thursday unveiled plans to create a tourist destination unlike anything in the metro.

The land owned by the Chickasaw Nation will be transformed into a $300-plus million, world-class resort and First Americans cultural destination. Oklahoma City leaders and developers expect OKANA Resort & Indoor Waterpark to draw national and international visitors.

“Oklahoma City used to be a place that you just slept in as you drove from Little Rock to Albuquerque,” said David Holt, Oklahoma City Mayor.

Holt said gone are the days visitors will just drive through the city. They will turn off I-40 onto Eastern Avenue for an experience.

The opening of the First Americans Museum created a vision for the future. The Chickasaw Nation will continue the momentum by breaking ground in 2022 on the home of the OKANA resort. The development will be built along the Oklahoma River and next to the museum.

“I think you can begin to appreciate how significant this site is going to be for our city’s future,” said Holt.

The 11-story, 404-room hotel will be part of a family-friendly resort to include an indoor water park, entertainment center and a five-acre outdoor water lagoon. The plans also include a Native American Market, a 1,500 seat amphitheater and conference center.

“There are any number of Native American festivals, meetings, convenings that will happen at this site,” said Holt. “And I think it will establish itself as the premier place to do that in our whole country.”

The site will also tie into the Oklahoma River Ferry Cruises and trails. The economic impact of the development is projected to be $97 million in the opening year and create 500 jobs.

“To add this $300 million development to the mix over there,” said Zac Craig, Oklahoma City Convention & Visitors Bureau. “It’s really going to take out city to new heights.”

Visitors will not only come to learn about Oklahoma's Native American culture, but city leaders expect OKANA to become a vacation destination.

“There’s no large city in American that even comes close to offering the experience that we will offer,” said Holt.

The project is expected to be completed and opened by June 2024.