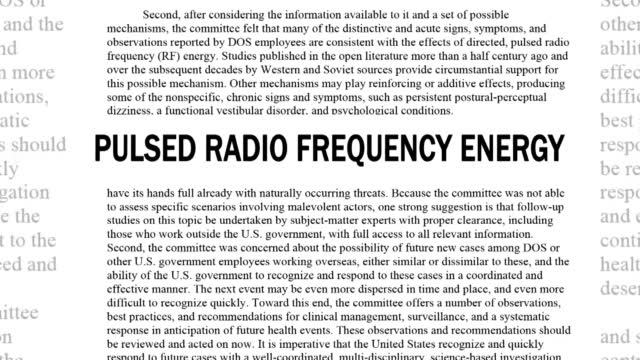 A retired CIA officer, who says he has been a victim of so-called "Havana Syndrome," calls the mysterious and debilitating neurological symptoms "an act of war against U.S. officials."

Marc Polymeropolous ran clandestine operations across Europe and Asia for the Central Intelligence Agency. So, when he traveled to Moscow in 2017, the watching eyes of Russian intelligence did not faze him.

"Even in my hotel room, I'd go to the gym, and a guy in a black trench coat comes down and, you know, checks on me down there," he told CBS News senior investigative correspondent Catherine Herridge. "Not unexpected. Part of the job."

Then, in his hotel room, the trip took a dangerous turn.

"I woke up in the middle of the night, because I had this incredible case of vertigo. It felt almost as if I was in some kind of carnival ride. And I'll tell you, Catherine, I had spent years in the war zones of Iraq and Afghanistan. I put my life on the line. This was the most terrifying experience of my life. I had no control."

Polymeropoulos said he experienced pressure in his head, a loss of balance, and ringing in the ears.

Back in the U.S., Polymeropolous reported to the CIA medical office. "I said, 'Is this consistent with Havana Syndrome?' And their answer was no."

Havana Syndrome is the name given to a mysterious neurological condition first reported by State Department personnel in Cuba five years ago who experienced a similar set of symptoms. There have been at least 130 suspected cases.

CBS News has learned that suspected cases are spread across at least six countries and among Defense Department employees, often occurring near active Russian operations.

"I've had a headache for three years," he said. "It feels like a vice clamp down here. And there's pressure that comes over the top of my head."

He said it took three years to get help at Walter Reed military hospital. "They diagnosed me with a traumatic brain injury. It's on paper. I have it."

Polymeropoulos' CIA colleague, who was also affected, painted a picture called "The Gunshot" during their Walter Reed art therapy sessions. "This is the invisible wound that, you know, no one believed us for a long time."

The National Academies of Sciences recently found the most plausible explanation was "pulsed radio frequency energy."

There are no public images of the alleged device. A knowledgeable source told CBS News that the technology behind a Russian-made microwave generator from the '90s is likely similar to today's smaller, mobile units.

CBS News has also learned that the U.S. government is fast-tracking sensor technology to detect these mysterious energy events.

In recent months, two suspected cases were reported near the White House.

"This is clearly an escalation," said Republican Senator Susan Collins, who authored legislation that gets victims medical and financial support. On the Senate floor, Collins said, "This bill will provide much-needed assistance to the employees of the intelligence community, the State Department, and other federal agencies."

In a moment of rare bipartisanship, the Senate passed the bill unanimously last week.

"Russia is certainly a likely suspect," Collins replied. "President Biden should send an unmistakable message to the Russians that if they are behind these attacks, they must stop them immediately. We have to have full cooperation from the Russians, or they must be made to pay a price."

Still unable to concentrate for more than a few hours at a time, Polymeropoulos made the hard decision to retire from the agency he loves.

"Who feels safe to serve now overseas with this happening?" he asked. "My contention is that it's the Russians. But whatever adversary is doing this certainly has not seen anything from the U.S. government that's telling them to stop."

Based on nearly three decades at the CIA, Polymeropoulos said writing his book, "Clarity in Crisis" was cathartic.

"It's about leading in times of ambiguity. And times where, where there's a lack of situational awareness. It was an incredibly therapeutic experience for me. I suppose you can actually, see some similarities to the situation I went through."

In a statement to CBS News, the CIA director of public affairs, Tammy Thorp, responded: "Nothing is more important than taking care of CIA officers – both by ensuring that they get the care and treatment they deserve, and making sure that we get to the bottom of what caused these incidents."

A State Department spokesperson said, "Secretary Blinken has made clear that there is no higher priority than the health and safety of our workforce. ... At this time, we do not know the cause of these incidents, which are both limited in nature and the vast majority of which have been reported overseas. We also do not know whether they constitute an attack of some kind by a foreign actor, but these are areas of active inquiry."