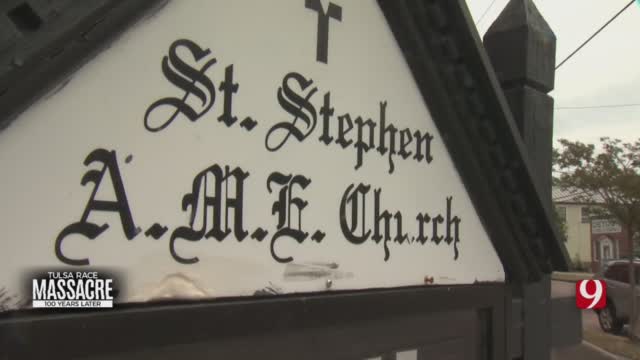 As Tulsa approaches the 100-year commemoration of the 1921 Tulsa Race Massacre, a town in North Carolina continues to face the reality of its past, too.

In Wilmington, white supremacists overthrew the city government in 1898 and an unknown number of black men were murdered.

The sun rises on the North Carolina coast and the Atlantic waves glide over the sand and shells on the shoreline of Wilmington: A beach town full of activity along the ocean, and downtown, near the Cape Fear River.

"There's so much to do. There's a lot of breweries, plenty of places to eat,” Cody Orange said. Orange, who grew up in Oklahoma, moved to Wilmington a few years ago with his family.

But away from the busy sidewalks, fresh seafood, boats and college life at the University of North Carolina-Wilmington, the town has a history familiar to Tulsa.

"Wilmington was one of the first examples of mass murder, no one held accountable, and the white leadership became proud of what they did,” said LeRae Umfleet, Special Projects Administrator for the North Carolina Department of Natural and Cultural Resources.

Historians like Umfleet said the 1898 massacre is considered to be the only successful coup d'état in United States history - an overthrow of a legally elected government, by force.

The coup and massacre happened two days after an election for Congress and the state legislature. Umfleet said the election took place on November 8 and Democrats won every position they had a candidate up for.

“On November 9, the White Democratic party leadership, who were the party of White supremacists come together and say, ‘You know, we won this election, and we now have a Democratically controlled legislature in Raleigh, but we still have a Republican mayor and Black men on the board of alderman running our city, and this we cannot tolerate any longer,’” Umfleet explained.

On November 10 at city hall, the progressive White mayor and every city alderman, including several black men, were forced to resign under the pressure of white supremacists. A months-long statewide white supremacy campaign that spilled out on the front pages of newspapers, helped lead to the coup. Outside, white mobs were taking over the streets, historians said, killing at least 40, but as many as 200 black men.

"In the course of one day everything in the city changed,” Umfleet said. “It meant that the African American community that was financially stable, upward moving, and vibrant was then decimated."

Umfleet works for the state and led the research for a 2005 report on the massacre, later turned into a book. She said the first attack was at the Daily Record, a black newspaper, which was set on fire.

“They destroyed a voice for the black community to share knowledge and information across the city,” Umfleet said.

That paper would never print again.

"Just driving by, it looks like the church parking lot,” Umfleet said.

It is a similar story at the intersection where she said the first shots were fired.

"This is an empty lot,” she said. “There are no markers. There are no monuments. There is nothing to tell us that something happened here that was so tragic."

It's peaceful at 6th and Bladen now, but Umfleet said that intersection was the deadliest site of the massacre.

"By the end of that exchange as many as 25 to 40 people were killed at this intersection by the machine gun at one full swoop,” she said.

A building that still stands strong today is St. Stephen African Methodist Episcopal church. Historians said St. Stephen AME church served as a hub to the black community, with a library, dentist office, and a swimming pool inside.

"In this photo, Athalia and I are sitting on the steps to her porch,” Cynthia Brown said while looking back at an old picture.

Brown is the church historian and a descendant of a survivor.

"My great-grandmother Athalia Howe witnessed a man being shot, when he was leaving his home going to work that morning,” Brown said.

She said Athalia, like so many others, first ran toward the church to seek refuge, but realized it was under siege by men known as the "Red Shirts."

"It was believed that St. Stephen, being the hub that it was for the community was harboring ammunition,” Brown said.

Historians said the Red Shirts forced their way inside but did not find ammo and moved on without damaging the church.

Today, Athalia is honored with a plaque on one of the church pews.

It was not until the 1950s, 60s and 70s that African Americans started serving as firefighters, police officers and politicians again in Wilmington. Today, there are two black men on the city council.

Now, a memorial honors the victims and shares the story of what happened in 1898. It was dedicated at the 110th commemoration of the massacre.

Conversations in the community during the 100th anniversary were pivotal to the city's future.

That is one reason both women said looking back at Wilmington's history, while difficult, is so important.

"To forget is a tragic thing in and of itself. We have to remember these things,” Umfleet said.

For more information on the 1898 coup and massacre in Wilmington, click here.

Courtesy: Photos in the televised story are courtesy of the New Hanover County Public Library, North Carolina Room; the State Archives of North Carolina; and the Cape Fear Museum of History and Science, Wilmington, NC.