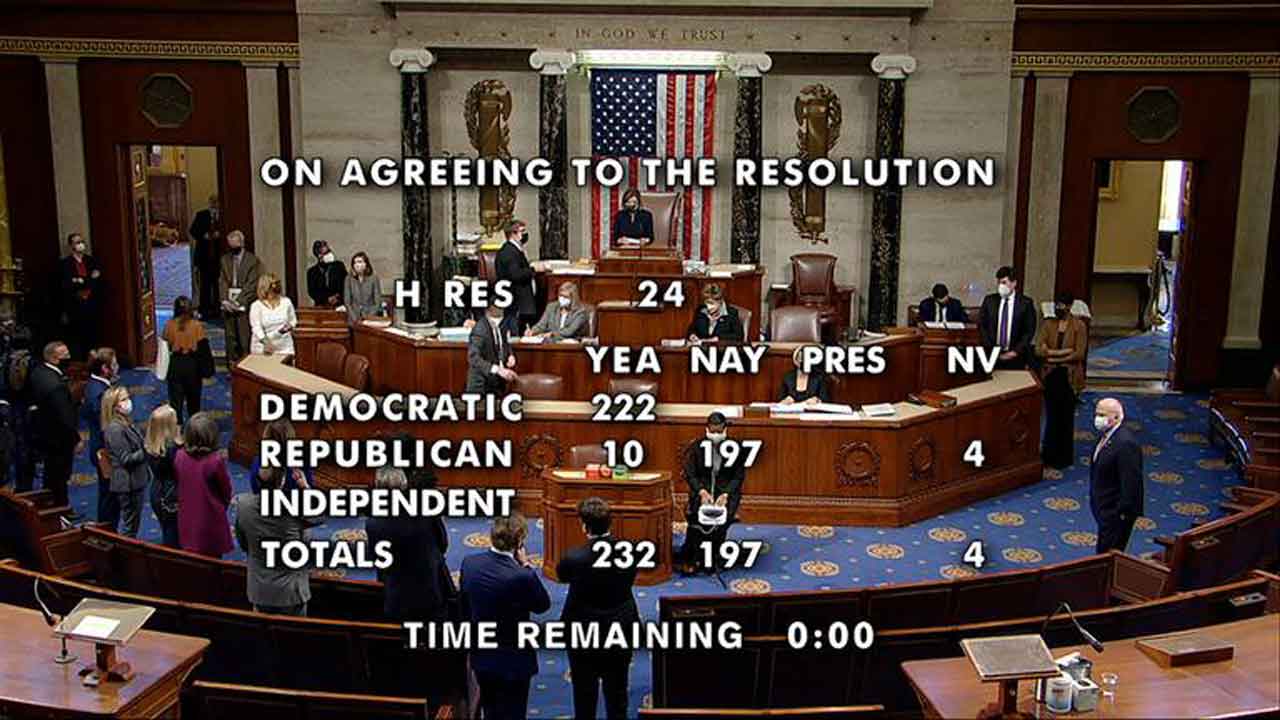 Ten Republican members of the House, including one of its highest-ranking leaders, joined Democrats in voting to impeach President Trump for inciting the deadly attack on the Capitol last week by a violent mob of his supporters.

The final vote was 232 to 197, as the 10 Republicans joined all 222 Democrats in voting in favor of the impeachment resolution.

The article of impeachment will next be delivered to the Senate, where Mr. Trump will be placed on trial. However, Senate Majority Leader Mitch McConnell said after the House vote that there is "simply no chance that a fair or serious trial could conclude before President-elect Biden is sworn in next week."

Mr. Trump is the first president to be impeached twice. When he was impeached in 2019 over his attempts to pressure Ukraine to investigate Joe and Hunter Biden, no House Republicans voted in favor of impeaching him. But this time, 10 members of his own party determined his actions warranted impeachment.

Here are the Republicans who voted to impeach Mr. Trump:

Cheney, the third-ranking Republican in the House, said in a statement on Tuesday that she would vote to impeach Mr. Trump after he whipped up his supporters Wednesday at a rally not far from the Capitol.

"The President of the United States summoned this mob, assembled the mob, and lit the flame of this attack. Everything that followed was his doing. None of this would have happened without the President," Cheney said, referring to Mr. Trump's appearance at a January 6 rally, when he told his supporters, "If you don't fight like hell, you're not going to have a country anymore." She also criticized his repeated calls for Republican lawmakers to try to overturn the election.

"The President could have immediately and forcefully intervened to stop the violence. He did not. There has never been a greater betrayal by a President of the United States of his office and his oath to the Constitution," Cheney, the daughter of former Vice President Dick Cheney, continued. "I will vote to impeach the President."

Congressman John Katko was the first Republican to say he'd vote to impeach Mr. Trump on Tuesday. Katko represents a district in upstate New York which leans Democratic, and he has faced significant challenges in his last two elections.

"To allow the president of the United States to incite this attack without consequence is a direct threat to the future of our democracy," Katko said in a statement reported by Syracuse.com. "For that reason, I cannot sit by without taking action. I will vote to impeach this president."

Congressman Adam Kinzinger of Illinois, a frequent critic of Mr. Trump, announced Tuesday in a tweet, "I will vote in favor of impeachment."

"There is no doubt in my mind that the President of the United States broke his oath of office and incited this insurrection. He used his position in the Executive to attack the Legislative ... If these actions — the Article II branch inciting a deadly insurrection against the Article I branch — are not worthy of impeachment, then what is an impeachable offense?"

Congressman Fred Upton of Michigan announced his support for impeachment Tuesday night. "I would have preferred a bipartisan, formal censure rather than a drawn-out impeachment process," he said in a statement."But it is time to say: Enough is enough."

Upton said Congress must "send a clear message that our country cannot and will not tolerate any effort by any President to impede the peaceful transfer of power."

Newhouse said on Wednesday that he would support impeachment.

"There is no excuse for President Trump's actions," Newhouse said in a speech on the House floor, adding that he would vote for impeachment "with a heavy heart." Democrats applauded after his speech.

Six Republican lawmakers introduced a resolution to censure Mr. Trump on Tuesday evening. Unlike impeachment, censuring does not have any practical consequences, but would have only been a formal condemnation.

In the Senate, a few senators have also signaled that they may be willing to consider voting to convict Mr. Trump, though the bar is higher in the upper chamber. While it takes a simple majority to impeach the president in the House, two-thirds of the senators must vote for the president's conviction and removal.