Is It Worth Leaving Your House For Black Friday Sales? 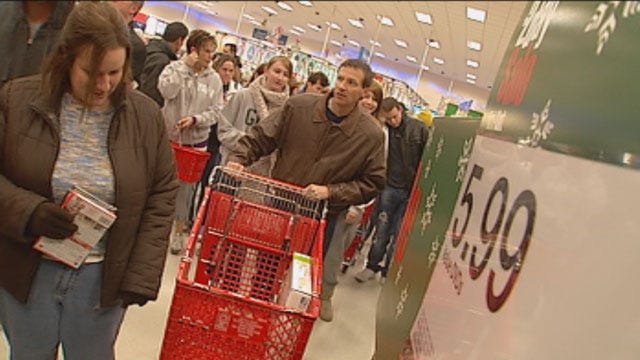 Black Friday is known for its "doorbuster" discounts — a deal so good that it brings crowds flocking into stores on the day following Thanksgiving. This year, amid the resurgent coronavirus pandemic, the idea of crowding into a store with hundreds of other shoppers is problematic for consumers or retailers alike.

The good news, shopping experts say, is that the in-store doorbuster deal has migrated online in 2020, which means that consumers won't have to leave their homes to snag a deal. That's because major retailers such as Walmart and Target have changed their Black Friday plans to encourage more online shopping, with the goal of thinning crowds in their stores.

In many cases, consumers will find the same sales online as they will in stores, said Nathan Burrow, the deals editor at The New York Times' Wirecutter shopping site, which has analyzed retailers' plans. In some cases, Black Friday isn't even taking place on the day after Thanksgiving as stores seek to spread out discounts — and customers — more evenly ahead of the holidays. Walmart, for example, said it has "reinvented" Black Friday by rolling out deals on three different dates.

"We believe most of the items available in the store will be available online, and that's across all major retailers — Best Buy, Target and Walmart," among others, Burrow said. "It would seem that they are trying to drive shopping behaviors toward shopping online and shopping early, rather than driving crowds to the stores on the day itself."

Walmart is offering three Black Friday events, although the first two have already passed (on November 4-7 and November 11-14). The third and final event spans the traditional Black Friday schedule, with online sales beginning on November 25 and in-store sales kicking off on November 27, the day after Thanksgiving.

For its part, Target has said it's offering most Black Friday sales online, although it's also encouraging shoppers to use other services that don't require an in-store visit, such as curbside order pickup and same-day delivery with Shipt.

Consumers who want to shop in person aren't likely to experience the type of door-mobbing crowds of previous years. Walmart, which plans to open its doors at 5 a.m. on Black Friday, said it will ask customers to form a single line to enter the store, while employees will hand out sanitized shopping carts and remind shoppers to wear a mask. The number of visitors inside Walmart stores will also be limited to cut down on crowding.

The U.S. Centers for Disease Control and Prevention is encouraging consumers to shop online to lower the risk of getting infected. The agency says that "going shopping in crowded stores just before, on or after Thanksgiving" is a higher-risk activity.

It's clear that health and safety are top of mind for shoppers, said Tyson Cornell, consumer markets industry leader for PwC. A recent survey by the consulting firm found that almost 9 in 10 consumers said pandemic-related safety procedures were very important to them, Cornell noted. Among the top two safety protocols that people want to see in stores: mask requirements and limits on in-store crowds.

"You've seen the big events are planned differently this year," he said. "Retailers have different specials and deals — it's not about driving traffic for a couple days."

Online shopping is likely to be the big winner this holiday season, according to PwC. About 6 in 10 consumers plan to do most of their shopping online, versus 40% consumers who said they will shop in stores, its survey found.

There could be instances when in-store shopping could provide an edge, Burrow of Wirecutter said. Some local businesses might not have an online shop, for instance. And some sought-after items could sell out online but remain available in stores, including video game consoles such as the PlayStation 5 and Xbox, which sold out earlier this month via online sales at Walmart and other retailers.

"In terms of in-person shopping, there are stores that don't have robust online operations, like local businesses, and we would recommend going on social media to see what curbside options they have, in the event they don't have an robust online presence," Burrow said.

He added, "Every day we make tough decisions about what degree we are going to shop in person."

Is It Worth Leaving Your House For Black Friday Sales?