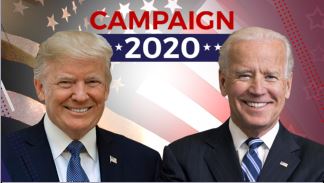 CBS News projects Joe Biden is the winner in Wisconsin and Michigan, capturing 26 electoral votes and inching closer to the 270 he needs to capture the White House and deny President Trump a second term.

CBS News still considers North Carolina, Pennsylvania and Georgia toss-ups, while Biden is likely to win in Arizona and Nevada. Biden is currently projected to win states that control 253 electoral votes, just 17 votes shy of the 270 needed to win the White House. A projected win in Arizona and Nevada would give him precisely 270 votes. The president's total currently stands at 213.

Even before news organizations began projecting Biden to win Wisconsin on Wednesday afternoon, Bill Stepien, the president's campaign manager, said the campaign would "immediately" seek a recount, which is permitted in Wisconsin when the margin of victory is less than 1 percentage point. Biden's lead in the state stands at about 0.6 percentage points.

Stepien said the campaign also moved to file suit in Michigan court to stop officials from counting ballots there, saying campaign observers have been denied adequate access to vote-tallying locations. However, Michigan Secretary of State Jocelyn Benson told CBSN the suit does not have merit and is confident in the process of counting all votes.

The Trump campaign also took three more legal actions in Pennsylvania, where Biden has cut into the president's lead as votes were counted over the course of the day.

The president has falsely claimed victory in the election, portraying the orderly counting of millions of legally cast votes as an illegitimate effort to steal the election and vowing to challenge the continued counting all the way to the Supreme Court. Elections officials across the country said Wednesday that the vote-counting process has gone smoothly, with few if any irregularities.