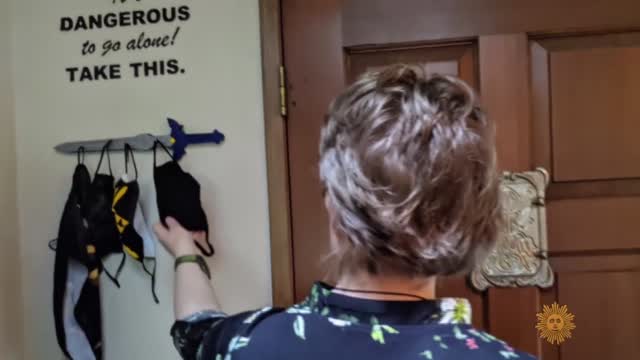 When it comes to wearing a mask, Seattle writer Wendy Sparrow was way ahead of the curve: "I've been wearing a mask during flu season and allergy season for, like, years," she said. "And people would look at me when I would walk into a store and they would stare at me."

Masks and hand sanitizer are both part of Sparrow's lifelong mental health battle with OCD, or obsessive compulsive disorder. "I plan for all of the worst things that could happen," she said. "I have first aid kits everywhere. I have, like, multiple ones in my house."

"Yes, first aid kits! I mean, somebody could get their head lopped off and I could just probably get it back on with the first aid kits I have around."

"You described yourself as suffering from something called contamination phobia. Can you explain what exactly that is?"

"As far as like germs go, up until I can see somebody, like, sneeze or something, I'm usually okay with it," Sparrow said. "I don't go to hazmat levels of cleaning, unless somebody is sick. And then I kind of lose my mind."

She's been accused of over-reacting for as long as she can remember, until COVID-19 came along: "One of my friends online commented to me the other day, she goes, 'How does it feel to have mask-wearing normalized finally?' And I was just like, I'm not gonna get stared at anymore!"

But, as gratifying as you might think that would be, she says the pandemic actually has made her OCD worse. "It's much harder to control symptoms and habits and stuff like that when you are genuinely, you know, at risk for these things," Sparrow said. "I mean, how do you tell yourself, No, that's too much hand sanitizer, when at this point, there's no such thing as too much hand sanitizer?"

"We're in the midst of a mental health epidemic right now, and I think it's only gonna get worse," said Dr. Vivian Pender, president-elect of the American Psychiatric Association.

Spencer asked, "You don't think the worst is over?"

"No, not at all. No, I think in a way the worst is yet to come, in terms of mental health. There's gonna be tremendous grief and mourning for all the lost people, and the lost opportunities, and the lost dreams and hopes that people had."

She said the pandemic is aggravating mental illness among those already battling it – and taking a toll on the rest of us, too. "Anxiety always rises in the face of uncertainty, and we're living in very uncertain times," she said.

More than half (53%) of American adults say their mental health has suffered because of the pandemic. Prescriptions for antidepressants shot up 14% after the initial outbreak.

Spencer asked Atlanta psychiatrist Dr. Sarah Vinson, "You could argue that, given all that's going on, having a mental health issue is just a normal reaction?"

"Absolutely," Dr. Vinson replied. "And so, what we really have to be careful about when we're talking about mental health during this time is, what's an actual anxiety or depressive disorder, and what is just a stress response that makes sense given how uncertain the world feels?"

So, how do you know when you should really worry?

"A big thing that differentiates just sort of typical stress versus a disorder is if there's actually impairment," Dr. Vinson said. "Is this getting in your way? Is this making it difficult, or impossible even, for you to do your work, fulfill your responsibilities in your household, sleep at night? And when that continues for weeks at a time, that's when you should think maybe this is more than just a stress response."

Dr. Vinson splits her time between private practice and a public clinic where, unfortunately, business is booming. The clinic's wait list is around three to four weeks.

Spencer asked, "So, if someone is having a serious mental health issue, it's gonna take weeks to see anybody?"

"Unless they go to an urgent care or that sort of thing, because the people that we already have are taking up more of our time," Dr. Vinson said.

Across the country, long waits are standard fare, due mostly, Dr. Pender said, to a lack of money and a chronic shortage of providers: "Mental health services have been underfunded for a long time, and they're still underfunded," she said.

One recent study by the National Council for Behavioral Health found more than half (54%) of behavioral health organizations have closed programs due to Covid-19 – while 65% have had to reschedule or turn away patients … all of which affects some groups more than others.

Spencer asked retired California schoolteacher Valerie Andrews, "How do you evaluate the entire mental health system in terms of meeting this challenge for people of color?"

"I would definitely probably give it a D-minus, if not an F," she replied.

That's why Andrews recently launched a non-profit for women of color facing mental health challenges, MsMableSparrows. She's battled anxiety and OCD her whole life, but didn't get a diagnosis until she was well past 50.

Spencer asked, "Do you have a sense of what treatment is available in the community today?"

"Very little," Andrews replied. "There's no availability if you don't have insurance. For most people, it's too expensive, or there's too much negativity around it. Or there's not enough people that look like them to talk to. So, all of those factors come into play.

Like Wendy Sparrow, Andrews said the pandemic has aggravated her OCD. But even so, after the death of George Floyd, she managed to take a very big step: "I went to my first march, a Black Lives Matter march."

"But your OCD centers around a fear of getting sick,' said Spencer. "And in a protest, you're with hundreds, thousands of people – I would have thought that would have been terrifying?"

"It really was," Andrews said. "I did double masks. I did, you know, double gloves. I carried my hand sanitizer with me. My daughter, who's a nurse, was with me. So, we didn't stay long, but it was important enough to get out there and have my voice heard."

An inspirational note to which all of us in this COVID-19 struggle now can relate.

Wendy Sparrow said. "There's always hope. And I think the world needs to feel that right now. But also people with mental health issues, even if you're just like thinking, '2021, please get here already!' there are better days ahead. This isn't going to be forever."