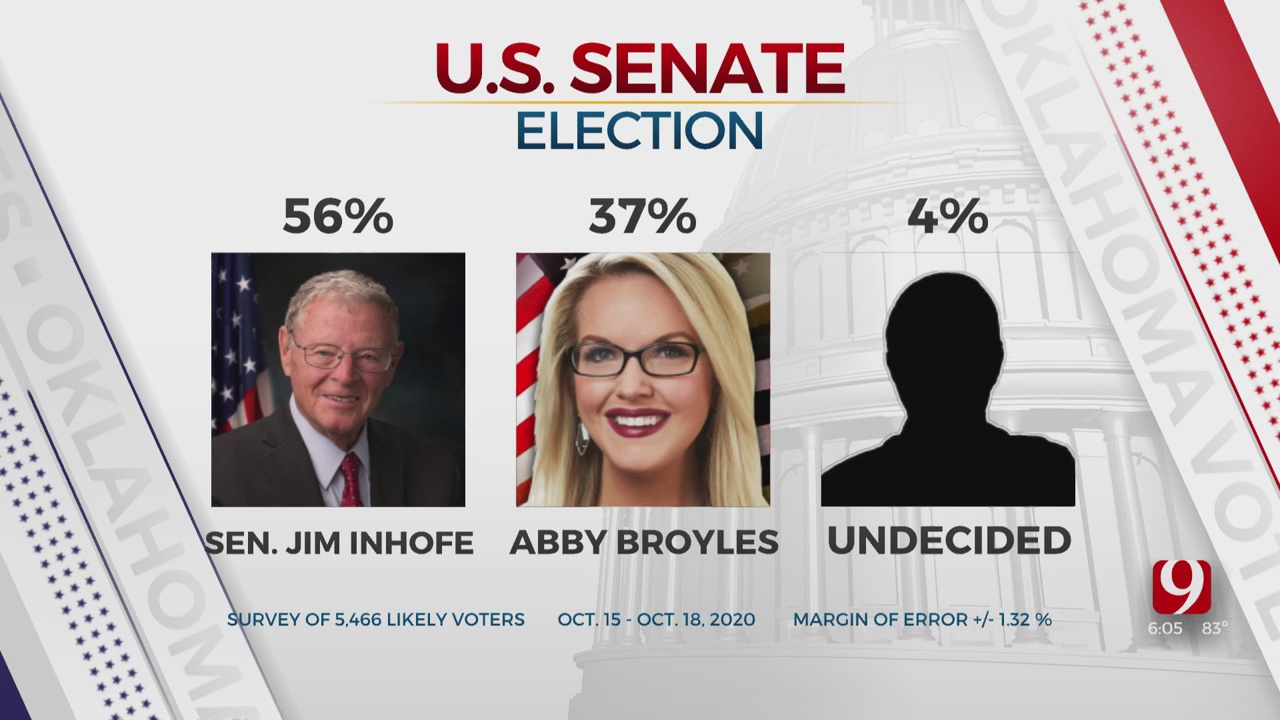 Republican U.S. Senator Jim Inhofe has a substantial lead over his Democratic rival, Abby Broyles, in the U.S. Senate race that many have said might very well be Inhofe's final run for office. Inhofe would be 86 years old if re-elected and would be 92 at the end of the term. If he is able to complete this possible upcoming term, he would be the third-oldest to serve in the senate in U.S. history.

The poll, which had a statewide sample of 5,466 likely voters -- the largest statewide poll ever conducted by SoonerPoll -- showed Inhofe was getting 85.5 percent of his Republican base of support and picking up 20.8 percent of support from Democrats. Independents, who make about ten percent of the electorate, favored Broyles 53.8 percent to 31 percent for Inhofe.

If the upcoming November GENERAL election for your U.S. Senate seat was held today, and you were standing in the voting booth right now and had to make a choice, for whom would you vote?

Moderates favored Broyles 65.1 percent to 27.4 percent, but Inhofe won decisively among self-identified conservative voters who make up more than half of the electorate on election day.

SoonerPoll.com, Oklahoma’s public opinion pollster, conducted the poll of Oklahoma likely voters for a general election. The poll was commissioned by News9 in Oklahoma City and Newson6 in Tulsa.

The scientific study was conducted October 15-20, 2020 with 5,466 likely voters selected at random statewide from a dual-frame of cell phones and landline telephones. Cell phone participants were texted a link to conduct the poll on their phones and landline participants were collected using IVR (Interactive Voice Response) technology. The sample was weighted by political party, age, and congressional district in order to reflect the Oklahoma likely voter population. The weighting was conducted using a 'layered technique.' The study has a Margin of Error (MoE) of ±1.32 percent.

A complete description of the methodology can be found here.

At Least 25 Die In Peru When Bus Plunges Off Cliff, Police Say