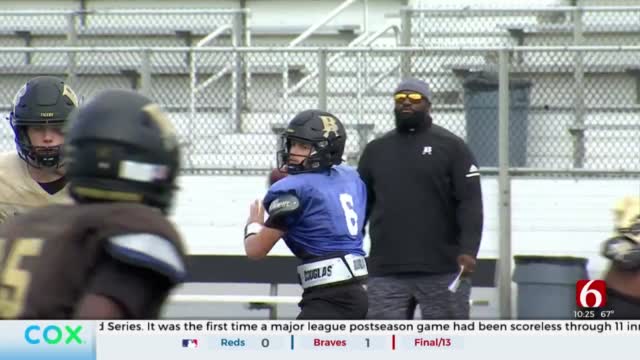 The Tulsa Tech Game of the Week Friday is a rematch of the 2018 state title game between Broken Arrow and Jenks.

Broken Arrow is a different-looking team this year, but their success still continues.

"You don't get anything good without hard work. Nothing good comes to you without working hard,” Tigers Head Coach David Alexander said.

You could end the Tigers’ story there, because that is the Broken Arrow culture, condensed into one sentence.

"I do think that we are a family. I feel like that is one big part. I do feel the love here,” running back Sanchez Banks said.

That hard work, that family atmosphere has the Tigers once again eyeing the state championship, despite losing two players to Power 5 conferences after graduation and starting an entirely new offensive line.

"This group was the JV offensive line last year, and they had a great JV season and so far they're putting really good stuff on film,” Alexander said.

"You think like, oh shoot, what are we going to do next year?” Banks said. “And then you realize you have just as much talent as last year.”

"We knew that no matter what, we're going to have to work harder than them just to be able to beat them,” Banks said.

If hard work breeds success, and success breeds confidence, Broken Arrow isn’t lacking in any of the three.

"Honestly we just have to play our game,” Banks said. “Honestly that's really it."