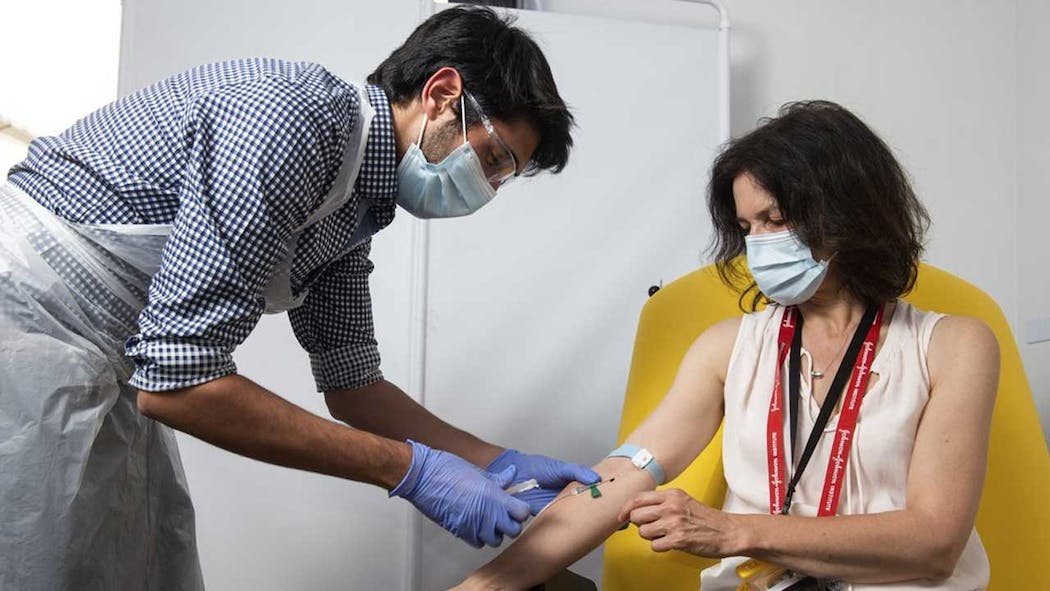 Scientists at Oxford University say their experimental coronavirus vaccine has been shown in an early trial to prompt a protective immune response in hundreds of people who got the shot.

British researchers first began testing the vaccine in April in about 1,000 people, half of whom got the experimental vaccine. Such early trials are designed to evaluate safety and see what kind of immune response was provoked, but can’t tell if the vaccine truly protects.

In research published Monday in the journal Lancet, scientists said that they found their experimental COVID-19 vaccine produced a dual immune response in people aged 18 to 55 that lasted at least two months after they were immunized.

“We are seeing good immune response in almost everybody,” said Dr. Adrian Hill, director of the Jenner Institute at Oxford University. “What this vaccine does particularly well is trigger both arms of the immune system,” he said.

Hill said that neutralizing antibodies are produced — molecules which are key to blocking infection. In addition, the vaccine also causes a reaction in the body’s T-cells which help to fight off the coronavirus.

The experimental COVID-19 vaccine caused minor side effects like fever, chills and muscle pain more often than in those who got a control meningitis vaccine.

Hill said that larger trials evaluating the vaccine’s effectiveness, involving about 10,000 people in the U.K. as well as participants in South Africa and Brazil are still underway. Another big trial is slated to start in the U.S. soon, aiming to enroll about 30,000 people.

How quickly scientists are able to determine the vaccine’s effectiveness will depend largely on how much more transmission there is, but Hill estimated they might have sufficient data by the end of the year to decide if the vaccine should be adopted for mass vaccination campaigns.

He said the vaccine seemed to produce a comparable level of antibodies to those produced by people who recovered from a COVID-19 infection and hoped that the T-cell response would provide extra protection.

“There’s increasing evidence that having a T-cell response as well as antibodies could be very important in controlling COVID-19,” Hill said. He suggested the immune response might be boosted after a second dose; their trial tested two doses administered about four weeks apart.

Hill said Oxford’s vaccine is designed to reduce disease and transmission. It uses a harmless virus — a chimpanzee cold virus, engineered so it can’t spread — to carry the coronavirus’ spike protein into the body, which should trigger an immune system response.

Hill said Oxford has partnered with drugmaker AstraZeneca to produce their vaccine globally, and that the company has already committed to making 2 billion doses.

“Even 2 billion doses may not be enough,” he said, underlining the importance of having multiple shots to combat the coronavirus.

“There was a hope that if we had a vaccine quickly enough, we could put out the pandemic,” Hill said, noting the continuing surge of infections globally. “I think its going to be very difficult to control this pandemic without a vaccine.”

Numerous countries including Germany, France, the Netherlands, Italy, U.S. and the U.K. have all signed deals to receive hundreds of millions of doses of the vaccine — which has not yet been licensed — with the first deliveries scheduled for the fall. British politicians have promised that if the shot proves effective, Britons will be the first to get it.

Chinese researchers also published a study on their experimental COVID-19 vaccine in the Lancet on Monday, using a similar technique as the Oxford scientists. They reported that in their study of about 500 people, an immune response was detected in those who were immunized. But they noted that because the participants weren’t exposed to the coronavirus afterwards, it wasn’t possible to tell if they were protected from the disease.

CanSino Biologics’ vaccine is made similarly to Oxford’s except the Chinese shot is made with a human cold virus, and the study showed people whose bodies recognized it didn’t get as much of the presumed COVID-19 benefit. Still, China’s government already gave special approval for the military to use CanSino’s vaccine while it explores final-stage studies.

In an accompanying editorial, Naor Bar-Zeev and William Moss of the Johns Hopkins Bloomberg School of Public Health called both the Oxford and Chinese results “encouraging” but said further judgment should wait until the vaccine is tested on much bigger populations.

Bar-Zeev and Moss also called for any effective COVID-19 vaccine to be distributed equitably around the world.

“Global planning is underway, but should be underpinned and informed by specific local realities,” they wrote. “Only this way can these very encouraging first earlyphase randomised trial results yield the global remedy for which we all yearn.”

Last week, American researchers announced that the first COVID-19 vaccine tested there boosted people’s immune systems just as scientists had hoped and the shots will now enter the final phase of testing. That vaccine, developed by the National Institutes of Health and Moderna, produced the molecules key to blocking infection in volunteers who got it, at levels comparable to people who survived a COVID-19 infection.

British officials said Monday they had also signed a deal to buy 90 million doses of experimental COVID-19 vaccines being developed by the pharmaceutical giant Pfizer and others.

In a statement, the British government said it had secured access to a vaccine candidate being developed by Pfizer and BioNTech, in addition to another experimental vaccine researched by Valneva.

The Associated Press Health and Science Department receives support from the Howard Hughes Medical Institute’s Department of Science Education. The AP is solely responsible for all content.

News 9 Katie Ledecky is 23 years old and has already secured herself in swimming history. She has now done something arguably more impressive.

Associated Press “Mulan” is no longer headed for a major theatrical release. The Walt Disney Co. said Tuesday that it will debut its live-action blockbuster on its subscription streaming service, Disney+, on Sept. 4.

Associated Press “Mulan” is no longer headed for a major theatrical release. The Walt Disney Co. said Tuesday that it will debut its live-action blockbuster on its subscription streaming service, Disney+, on Sept. 4.
View More Stories

Associated Press “Mulan” is no longer headed for a major theatrical release. The Walt Disney Co. said Tuesday that it will debut its live-action blockbuster on its subscription streaming service, Disney+, on Sept. 4.