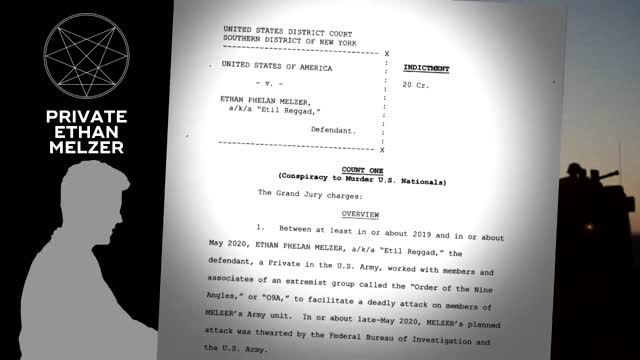 The Department of Justice said Melzer confessed to planning the attack "to result in the deaths of as many of his fellow service members as possible."

Melzer, a private, enlisted in the U.S. Army in December 2018, and joined the Order of the Nine Angles (O9A) in 2019, the Justice Department said. The Justice Department described members of the group as espousing "violent, neo-Nazi, anti-Semitic, and Satanic beliefs," and claimed they've "expressed admiration for both Nazis, such as Adolf Hitler, and Islamic jihadists," including Osama bin Laden. Members of the group have participated in acts of violence, including murder.

Audrey Strauss, the U.S. attorney in Manhattan, described Melzer, originally from Louisville, Kentucky, as an "enemy within."

"Melzer allegedly attempted to orchestrate a murderous ambush on his own unit by unlawfully revealing its location, strength and armaments to a neo-Nazi, anarchist, white supremacist group," Strauss said in a statement.

The Department of Justice said the FBI and the U.S. Army "thwarted" Melzer's plot in late May and he was arrested on June 10.

According to the Justice Department, Melzer deployed abroad in October 2019. Prior to planning the attack, he allegedly consumed propaganda from multiple extremist groups, including O9A and ISIS.

In April 2020, Melzer was informed of another deployment by his unit, and then allegedly sought to "facilitate a deadly attack on his fellow service members," the Justice Department said. After he was notified of his deployment, he allegedly used encrypted communications to share with O9A and a related group called "RapeWaffen Division" his unit's planned location, movements and security. Melzer and his co-conspirators allegedly planned what they called a "jihadi attack" with the objective of creating a "mass casualty" event.

Around May 17, Melzer allegedly exchanged electronic communications about passing along information to a person he believed was a member of al Qaeda. Between May 24 and 25, he allegedly shared information about his unit's planned deployment and promised to share more.

The Order of the Nine Angles is based in the United Kingdom, where anti-racism campaigners and lawmaker Yvette Clark have sought to have it outlawed as a terrorist organization, BBC News reported.

"The combination of Nazi-Satanism, extreme violence and sexual abuse makes it particularly troubling and action needs to be taken to prevent them grooming and radicalizing other people," Clark said in March.

British group Hope Not Hate says the group was founded in the 1960s.

Andres Triay contributed to this report.