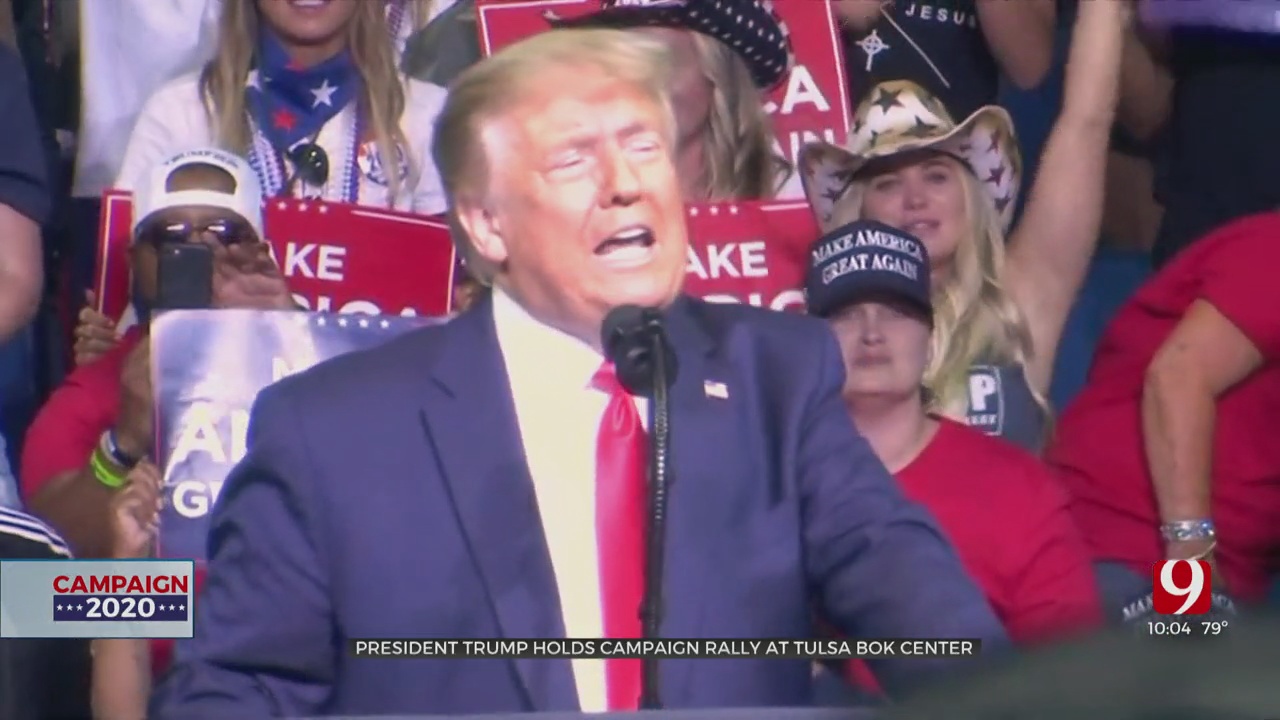 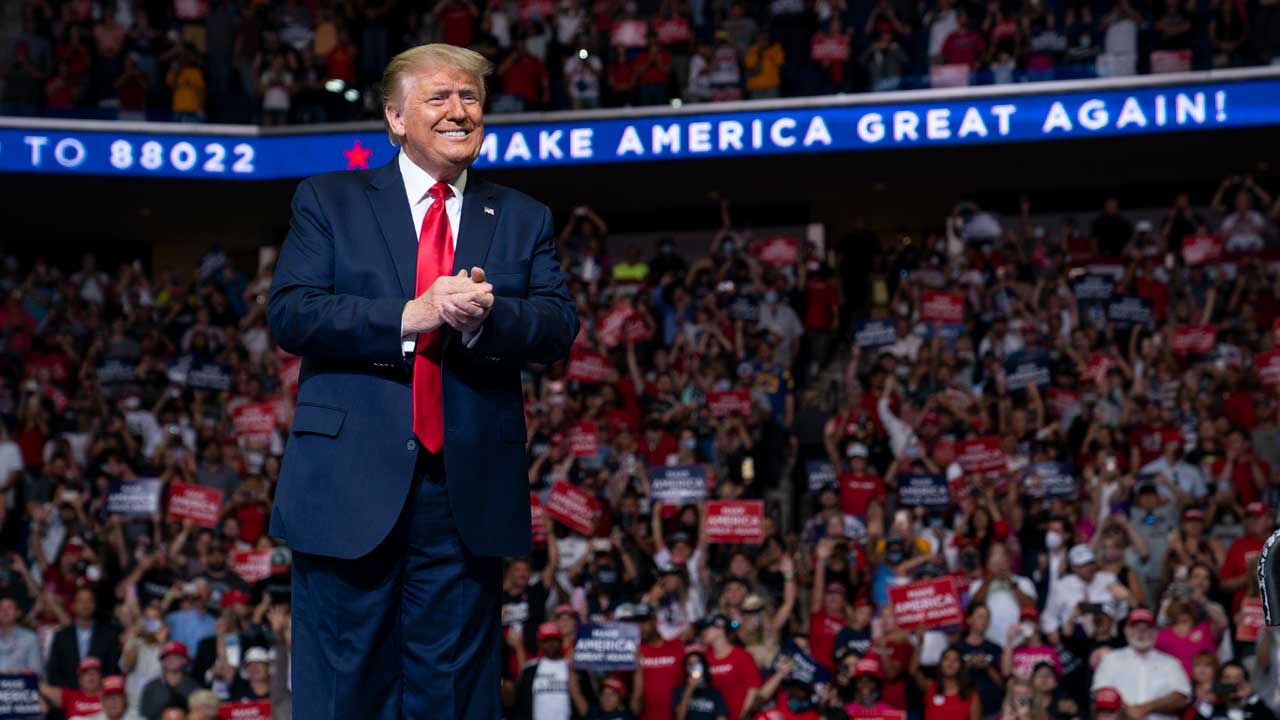 Voters have a choice in 2020 and it’s simple, President Donald Trump said during his rally Saturday evening in Tulsa, Oklahoma.

“The choice in 2020 is very simple,” Trump said. “Do you want to bow before the left-wing mob, or do you want to stand up tall and proud as Americans?”

This was the first rally held by the president and his campaign since the coronavirus outbreak shutdown much of everyday life in the United States.

Prior to the rally, many health care professionals expressed concern for holding a large event inside while COVID-19 cases are spiking. In Oklahoma, more than 1,100 new cases were reported in the last three days. This is the president’s first rally since his rally on Monday, March 2, in Charlotte, North Carolina.

While the rally was originally scheduled to happen on Friday, June 19, it was moved a day to avoid Juneteenth celebrations. Tulsa recently commemorated the 99th anniversary of the Tulsa Race Massacre, which saw the burning of Black Wall Street.

Doors for the event opened at 3 p.m. and all the attendees were to have their temperatures taken and were to be given hand sanitizer and face masks. Ahead of the event, many health officials made pleas to people planning to attend the rally to wear face masks.

Pence primed the crowd by touting Trump’s accomplishments before the coronavirus pandemic and how he handled the economy and national security.

Pence said justice will be served when it comes to the death of George Floyd but said there is no justification for looting and rioting.

George Floyd was a Black man killed in Minneapolis. Four officers have been charged in connection with the homicide. His death, which was recorded and posted to social media, sparked weeks-long protests across the country with some becoming violent.

“We are not going to defund the police. Not now. Not ever,” Pence said.

The president took to the stage shortly after 7:10 p.m. Inside, several sections of arena were noticeably empty when Trump began speaking.

“We begin our campaign,” Trump said. “The silent majority is stronger than ever before.”

The Trump campaign canceled an outdoor event scheduled for during the rally and said protesters were stopping rally-goers from getting to the arena.

“You are warriors. Thank you. We had some very bad people outside. … They were doing bad things. We have tremendous people in Oklahoma,” Trump said.

After starting his speech, Trump took early swipes at the press corps at the back of the arena and started talking about his accomplishments, including how many federal judges he nominated.

The president went back and forth between the recent protests and civil unrest across the country, the coronavirus pandemic, and how certain media groups were covering the protests, pandemic, himself and Biden.

The president pointed at the back of the room and addressed the “fake news” several times. Then, he aired his grievances about their coverage for him and for Biden, his apparent Democratic opponent.

“I saved hundreds of thousands of lives. We never even get it a mention,” he said about news coverage concerning his response to the COVID-19 outbreak in the U.S.

During his nearly two-hour long speech, Trump spent more than 10 minutes recounting embarrassing coverage of him while he was at West Point’s graduation.

He explained why he appeared to have difficulty going down a ramp and why he sipped his water.

He said he did not want to be recorded slipping and falling on a ramp and be ridiculed like President Gerald Ford or accidentally spill water on his tie.

“It is so unfair, they are among the most dishonest people,” he said of the “fake news” coverage.

The crowd, many of whom were not seen wearing face masks during the rally, cheered after Trump called COVID-19 the Chinese virus. He also dubbed the virus as the “Kung flu,” a term for the virus that many consider racist.

The president said the country has completed 25 million tests and that testing is a “double-edged sword.” At one point, Trump said he asked health professionals to stop testing as quickly to slow down the number of positive cases.

Trump vowed that the economy would go back up, and while it may not be as high as before the pandemic, it will be great.

“We saved millions of lives, and now, it’s time to reopen and get back to work,” Trump said.

Shifting gears, Trump called the tearing down of statues and “desecration” of monuments by the “unhinged left-wing mob” as an attack on American “heritage.”

The president listed Biden’s record and how the “radical left” is trying to change the country.

While speaking about recent events, Trump said “this country is in a lot of trouble” if he loses to the Democrats.

If Democrats win the presidency in 2020, Trump listed off how the country could be “destroyed” by the Democrats including them indoctrinating children with “hateful lies,” and taking away Americans’ guns and repealing the Second Amendment.

“They want to punish your thought but not their violent crime,” Trump said.

After introducing his top surrogates, including the Republican members of the Oklahoma Congressional delegation and Gov. Kevin Stitt, Trump listed his accomplishments during his first term and what he will do if he was elected to a second term.

Oklahomans overwhelming voted for Trump in the 2016 presidential election with every county turning red. Trump won more than 65% of the vote while Democratic nominee Hillary Clinton won more than 28%. Gary Johnson, a Libertarian, won more than 5%.

Trump won Tulsa County with more than 58% of the vote.