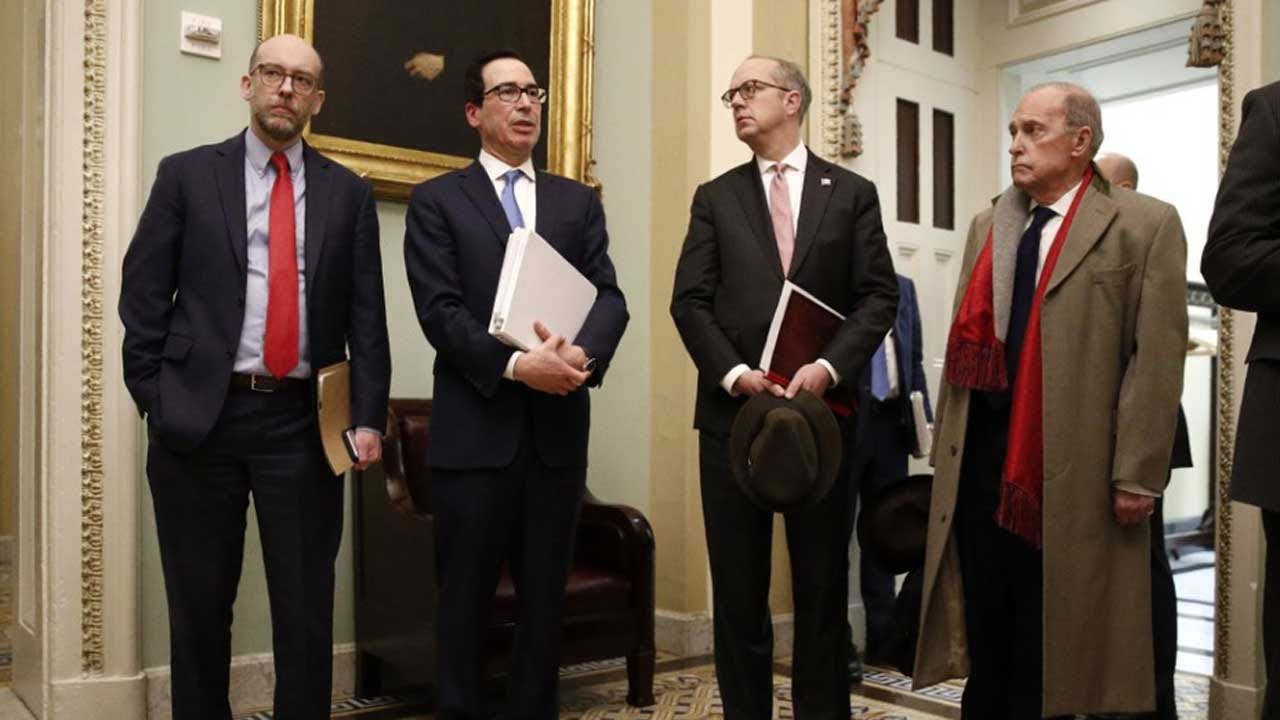 The White House is proposing a roughly $850 billion economic rescue package Tuesday amid the coronavirus outbreak, a sweeping stimulus for businesses and taxpayers amid unseen since the Great Recession of 2008.

Treasury Secretary Steven Mnuchin planned to outline the package to Senate Republicans at a private lunch, with officials aiming to have Congress approve it this week.

“The Senate will not adjourn until we have passed significant and bold new steps above and beyond what the House has passed to help our strong nation and our strong underlying economy weather this storm,” McConnell said.

Bigger than the 2008 bank bailout or the 2009 recovery act, the White House proposal aims to provide relief for small businesses, $50 billion for the airline industry and include a massive tax cut for wage-earners.

Two people familiar with the request described it to The Associated Press on the condition of anonymity because they weren’t authorized to speak publicly.

The White House hopes the measure will pass quickly, possibly this week, an enormous political undertaking as the administration scrambled to contain the economic fallout of the severe disruptions to American life from the outbreak.

White House officials offered senators a preliminary briefing late Monday at the Capitol, saying they want the plan approved by Congress as soon as possible, suggesting in a matter of days.

The rush to inject cash and resources into the economy is an effort unlike any since the 2008 economic crisis, with political and economic interventions and eye-popping sums to try to protect Americans from the health and financial fallout.

“We’ve got a lot of work to do from here,” Mnuchin told reporters late Monday.

The new proposal is beyond the House ’s estimated $100 billion aid package of sick pay, emergency food aid and free virus testing that was approved over the weekend and is pending before the Senate.

Now Congress will be rushing to pass to two — a massive, sweeping response to the virus outbreak that is rewriting America’s way of life.

Muscling the aid will test Congress and the White House at a pivotal moment in the crisis and in an election year when the two parties have vastly different outlooks on the best way to prop up the economy and help Americans.

Senate Democrats have proposed their own $750 billion package — boosting hospital capacity and unemployment checks for the suddenly jobless — with deep negotiations to come.

Schumer will meet with Senate Democrats on a conference call to outline their proposal.

At the start of the month, Congress approved $8.3 billion in initial aid. Trump quickly signed into law the measure, which provided federal agencies money for vaccines, tests and potential treatments, and funding to help state and local governments respond to the threat.

With an urgency unseen since the Great Recession, Congress is rushing to develop a sweeping economic lifeline for American households and businesses suddenly capsized by the coronavirus outbreak.

During the recession, the American Recovery and Reinvestment Act of 2009, passed in February of that year, had an initial price tag of $787 billion which was revised later to $831 billion. That was under Barack Obama.

The Tarp passed in the fall of 2008 to help troubled banks had a pricetag of $700 billion. It was put together by the George W. Bush Administration, and provided money for the auto bailouts for General Motors and Chrysler and all of that money for the banks and the auto companies was paid back.

Now, Republicans often reluctant to spend federal dollars did not flinch at the head-spinning number, as a roster of America’s big and small industries — airlines, hotels, retailers — lined up for aid.

The president conveyed that lawmakers should “not be impeded by the price tag,” said Eric Ueland, the White House legislative director.

Senate Majority Leader Mitch McConnell said he wants a “comprehensive” approach with “significant steps” for the economy, particularly Main Street businesses. He opened the Senate on Monday with a message to Americans: “The Senate stands with you.”

The days ahead will test whether Congress can quickly respond to the crisis.

Industries representing a broad swath of the economy are seeking help in withstanding the fallout as schools close and Americans are being told to stay inside, skip nonessential travel and avoid gatherings with 10 people or more.

That means no dining out, no boarding planes, no shopping the malls as a great national shutdown sparks business closures, layoffs and lost paychecks for rents, mortgages and everyday needs.

The nation’s largest business organization, the U.S. Chamber of Commerce, asked the Trump administration and Congress on Monday to act rapidly to help companies have access to cash and avert a “potentially devastating” hit to the economy.

The request from the U.S. airlines alone could easily top $50 billion, according to Airlines for America, the trade group representing the carriers.

In a letter to Trump and congressional leaders, the Chamber of Commerce called for legislation including a three-month cancellation of the taxes companies pay to support Social Security, Medicare and unemployment insurance.

“No family and no business should go bankrupt just because of the temporary disruption in income caused by the coronavirus,” said the chamber’s CEO, Thomas J. Donohue.

The nation’s governors were also calling on Congress to swiftly bring economic aid, particularly for the unemployment insurance system to help displaced workers, and fast.

“We need a better response from the federal government,” said Rhode Island Gov. Gina Raimondo, a Democrat. “I am out of patience.”

Pulling together the new package will challenge the basic logistics of governing as Congress itself struggled to adapt to the new normal.

House Democrats were told on a conference call they won’t be recalled to Washington until the next package is ready for action, according to people familiar with the call but unauthorized to discuss it and granted anonymity.

The 100-member Senate convened for an evening vote — a potentially stunning sight in the new era of social distancing. While different authorities around the country have issued conflicting advice, the Trump administration said at a Monday news conference that Americans should not gather in groups of more than 10 people over the next 15 days.

The No. 2 Senate Democratic leader, Dick Durbin of Illinois, counting the number of senators on the floor, questioned what example they were setting. He urged swift passage of the House package. “What are we waiting for?” he asked.

In addition, the National Federation of Independent Business, which counts hundreds of thousands of small-business members, initially opposed it.

For most people, the new coronavirus causes only mild or moderate symptoms, such as fever and cough. For some, especially older adults and people with existing health problems, it can cause more severe illness, including pneumonia.

The vast majority of people recover from the new virus. According to the World Health Organization, people with mild illness recover in about two weeks, while those with more severe illness may take three to six weeks to recover.