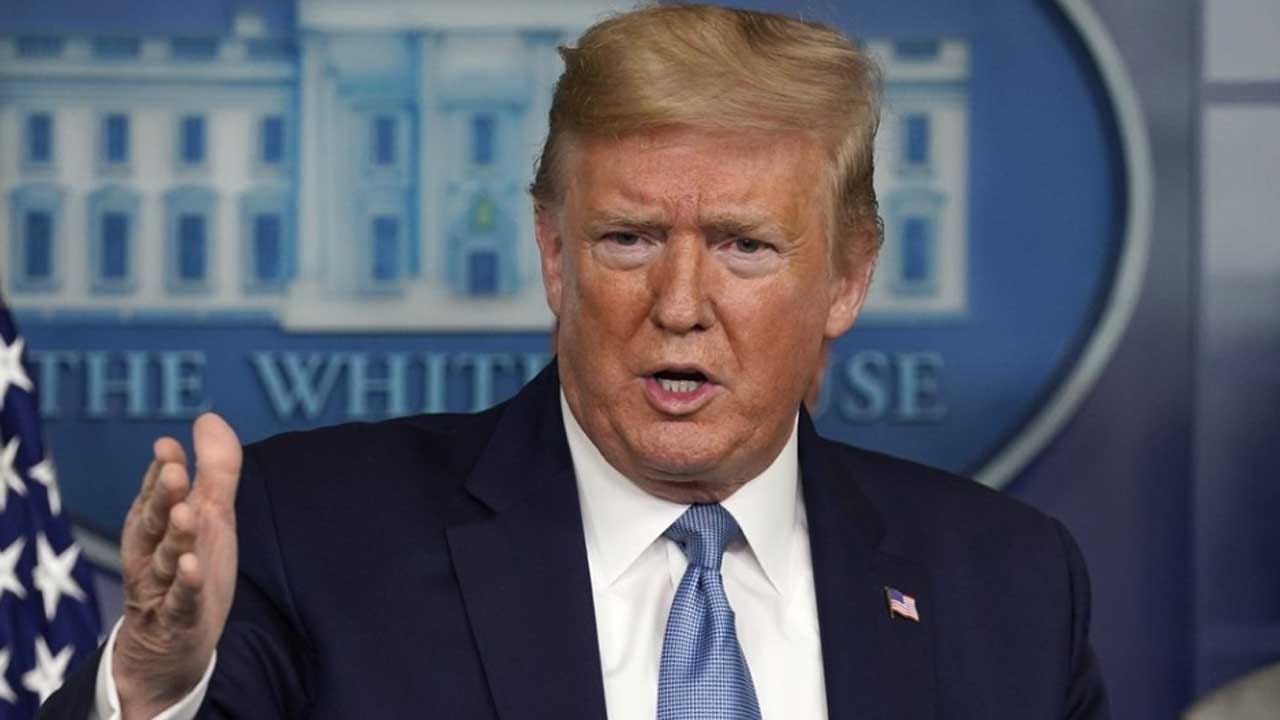 He called on the country to come together. He warned of pain to come. And he deferred to the nation’s public health experts while at least momentarily putting aside petty squabbling.

After weeks of trying to play down the risk posed by the coronavirus pandemic, President Donald Trump struck a new, more urgent tone Monday as he delivered a sobering message to Americans grappling with a new reality that will dramatically alter their lives for months to come.

Trump’s more somber tone came as he addressed the public at a White House briefing and made a direct appeal to all Americans to do their part to halt the pandemic’s spread.

Gone were Trump’s “do as I say, not as I do” handshakes that had continued even after health experts admonished people to avoid contact and practice social distancing. Also gone was the rosy talk aimed, in part, at propping up reeling financial markets.

The shift was informed in part by a growing realization within the West Wing that the coronavirus crisis is an existential threat to Trump’s presidency, endangering his reelection and his legacy. Trump has told advisers that he now believes the virus will be a significant general election issue and he took note of the clear-eyed, somber tone used by his likely general election foe, Joe Biden, in Sunday’s Democratic debate.

But by Tuesday, the president had returned to lashing out on Twitter at his critics.

With reports from Italy growing grimmer, U.S. cases surging and America’s economy in shock, Trump has also received a series of alarming briefings in recent days that have included dire projections about how many Americans could be infected if drastic action isn’t taken.

He also has watched the dramatic escalation of precautions within the White House complex, where officials are now screening everyone who enters the building after Trump unknowingly interacted with at least three people who have since tested positive for the virus. Already, both his press secretary, Stephanie Grisham, and his outgoing acting chief of staff, Mick Mulvaney, are isolating themselves at home after coming into direct or indirect contact with those who have COVID-19.

And so it was that on Monday, Trump matter-of-factly outlined the government’s newest recommendations, including urging all older Americans and those with chronic health conditions to stay home. All Americans were advised to avoid gatherings of more than 10 people.

Trump repeatedly deferred to the public health professionals on stage with him to offer specifics and answer follow-up questions, and he acknowledged the disquieting reality that the economy may well be careening toward recession and that Americans’ lives will likely be impacted for far longer than most people have even begun to process.

“If we do a really good job, people are talking about July, August, something like that,” he told reporters who filled every other seat in the briefing room in an attempt to practice social distancing.

National crises are times of testing for presidents, and after days of shrinking from the urgency, Trump approached the moment with newfound gravity.

For all of that, though, Trump was still Trump. He said he would award himself a 10-out-of-10 rating. And on Twitter, he was still needling a longtime political foe, New York Gov. Andrew Cuomo, who has called for a more assertive federal response.

On Tuesday, he added Michigan Gov. Gretchen Whitmer to that list after she criticized Trump for saying governors should work through their own supply chains to get ventilators and other needed medical equipment instead of relying on the federal government to get it for them.

“Failing Michigan Governor must work harder and be much more proactive,” Trump tweeted Tuesday. “We are pushing her to get the job done. I stand with Michigan!”

He followed up minutes later with: “Federal Government is working very well with the Governors and State officials. Good things will happen! #KILLTHEVIRUS.”

As recently as Saturday, Trump had said, despite all evidence to the contrary, that the country had “tremendous control” of the virus, even as cases soared, local governments were shutting down schools, and doctors were warning of an impending health catastrophe. He reframed that comment Monday, saying he’d been referring to his government’s handling of the crisis and not the virus itself.

“It’s not under control for any place in the world,” he acknowledged.

Trump for weeks had taken his upbeat cues from a network of outside advisers who told him the media and Democrats were hyping the threat. But he has also heard from allies who have urged him to bolster his response and change his tone, including some Republicans on Capitol Hill who feared they had been personally exposed to the virus.

Jared Kushner, the president’s influential son-in-law and senior adviser, who has recently taken a more active role in the administration’s response, has privately compared the virus to a “war” that could imperil the nation’s economy and population, according to two White House officials and Republicans close to the West Wing who spoke on condition of anonymity because they were not authorized to discuss private conversations. The pandemic’s impact could rival that of World War II, he has said, requiring a national effort.

Trump, who has always viewed himself as his best spokesman, has also expressed frustration in recent weeks that Vice President Mike Pence, whom he appointed to lead the White House task force, has been too robotic when he speaks at White House briefings.

But while he often chides his press aides for failing to adequately defend him, Trump himself has stumbled in his recent public remarks. He immediately recognized that he had erred during his Oval Office address to the nation last week when he made several misstatements that later had to be corrected. And while the stock market soared during the Rose Garden address he delivered the following day to try to repair the damage, the White House again was forced to play cleanup when it turned out that some of the developments he’d announced had been dramatically overstated.

Trump had hoped the markets would rise again Monday after the Federal Reserve’s announcement the previous day that it would slash interest rates, and he was rattled when they collapsed instead. Hoping to turn the tide, he told aides he wanted to speak at Monday’s 3:30 p.m. press briefing — the same late afternoon time slot as Friday’s Rose Garden news conference.

But this time, instead of a spike in the market, the Dow Jones continued to plummet as he spoke, dipped even further after the president admitted, for the first time, that the nation may be heading for a recession.

While Trump’s changes in tones are often fleeting, White House officials and allies saw Monday’s more measured approach as evidence the president was coming to grips with the magnitude of the challenges ahead for the nation and his presidency.

Americans — many struggling to work from home while juggling childcare, or facing job losses — needed to hear directly from their commander in chief exactly what they are in for, said Trump’s former communication strategist Jason Miller.

Said Princeton presidential historian Julian Zelizer: “I’m not sure a change in tone makes up for a kind of complete lack of leadership that the country has seen in the first few weeks of this crisis.”

Bev Banks contributed to this report.

EDITOR’S NOTE — For most people, the new coronavirus causes only mild or moderate symptoms, such as fever and cough. For some, especially older adults and people with existing health problems, it can cause more severe illness, including pneumonia.

The vast majority of people recover from the new virus. According to the World Health Organization, people with mild illness recover in about two weeks, while those with more severe illness may take three to six weeks to recover.