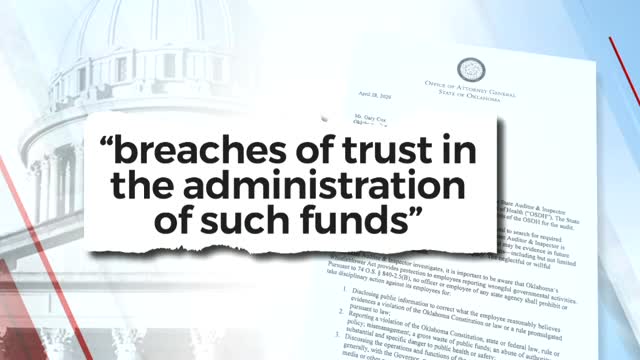 Specifics of the request cannot be released until the investigation is over.

“This is called an 18-F audit,” she said. “Once the attorney general gives us the letter, everything from that point on is confidential until we release the audit report.”

According to the request, Hunter’s office is looking for “breaches of trust in the administration of such funds” in regards to money appropriated by the legislature.

One state lawmaker said there is a lot going on behind the scenes.

He said there has been some criticism over the state’s efforts to secure personal protective equipment (PPE), like N95 masks.

But he added that a request for an audit during a pandemic is unfortunate.

“I think he (the governor) is exhausting every avenue to protect Oklahomans from the virus,” said Caldwell. “I think some are maybe criticizing him for potentially being too aggressive in the search. I have no doubt that if he had not taken such measures, he would have been criticized for not doing enough.”

“The Oklahoma State Health Department has been committed to full transparency with this administration’s proactive efforts to protect the citizens of this state from the novel COVID-19 virus. Every step of the way, the agency has been above board and quick to provide information, where legally able, on our transactions to anyone who asks, and we are confident the financial review will demonstrate our efforts for excellence. OSDH is prepared to comply with the audit and provide any and all information requested by State Auditor Cindy Byrd and her staff."

The auditor’s office said they can have a team ready to investigate next week.