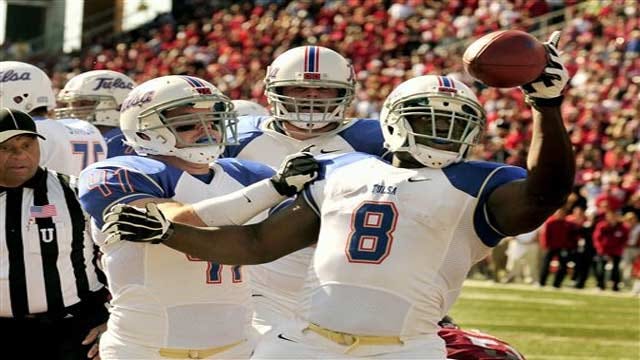 Believe it or not, spring practice is already underway for Tulsa Golden Hurricane. Last year at this time, the theme on campus was unfinished business. TU entered spring ball with its focus on winning Conference USA's West division, something it fell just short of in 2011.

2013 will have a different feel for Tulsa. The defending Conference USA champions enter this year no longer the hunters, but as the hunted.

Tulsa's 31-17 hammering of Iowa State in the Liberty Bowl only validated just how good last year's team was. But now expectations are higher, and TU will undoubtedly receive everyone's best shot in 2013. Repeating as champions will not be easy for a team that graduated eight starters on defense, three starting offensive linemen, and the school's all-time leader in touchdowns.

Here's a list of five things to keep an eye on during spring practice as the Golden Hurricane takes the first step toward defending its conference title.

Any football coach will tell you that the game is won and lost in the trenches. TU found that out last season on both sides of the ball, physically dominating one opponent after another. In fact, TU's 53 sacks last season ranked third in all of FBS football, while their 356 sack yards ranked No. 1 in FBS.

Well, take that and dump it, because all four Golden Hurricane starting D-lineman are gone. Returning are Brentom Todd, Derrick Alexander and Derrick Luetjen, who all received playing time on the D-line last season, along with the freshmen, led by three-star D-end Frankie Davis from Broken Arrow High School. TU's D-line won't dominate like it did last season, but that doesn't mean it can't still be solid. This will be the most wide-open position battle on the team.

If TU's defense is going to struggle this season, the offense is going to have to pick up the slack. Bryan Burnham was expected to be TU's go-to receiver last season, but went down in week one with a torn ACL. While his injury certainly hurt, it also allowed other guys to get opportunities. Keyarris Garrett stepped into the No. 1 role and ran with it, hauling in 67 balls for 845 yards and nine touchdowns. Garrett proved he has the athleticism, skill, and big-play ability to be a No. 1 wideout for this club for the next two seasons. It also allowed for Jordan James and Thomas Roberson to get more experience, but perhaps Burnham's absence impacted the running game more than anything else. Bill Blankenship knew he had a new quarterback that was going to be without the guy who was supposed to be his No. 1 option, so naturally he ordered more run plays. That change in offensive philosophy allowed TU's three-headed monster of Trey Watts, Ja'Terian Douglas and Alex Singleton to run roughshod over everyone all season and is ultimately what led Tulsa to the Liberty Bowl title.

But Alex Singleton's graduation means 25 of TU's 60 offensive touchdowns from last season are now gone, and the Hurricane needs to find a way to fill in the void. A healthy and ready-to-go Burnham would undoubtedly help, but that's where this gets complicated.

Burnham has still not been cleared by the NCAA to play this season. Due to his injury, the university filed for a sixth year of eligibility for Burnham, but the NCAA has not yet made its decision on whether that will be granted. A university spokesman recently told me that he expects the decision to be made relatively soon and TU is hopeful to hear the verdict at some point in the next month.

So while the Golden Hurricane is preparing on the field this spring, one of the most important things to watch for will come off the field.

Remember what I said about winning and losing in the trenches? TU's offensive line last season was nothing short of spectacular, paving the way for easily the greatest running game in school history. But tackles Jared Grigg and Brian DeShane are both gone, along with four-year starting center Trent Dupy. That's going to be tough to replace, but TU might just have the horses to do it.

Garrett Stafford filled in for the injured DeShane in the final two games last season and did a solid job, while Tulsa's recruiting class was lineman-heavy. Center Zac Uhles, tackle Dalton Rodriguez and guard Rob Boyd are all three-star recruits, while TU has a group of redshirted lineman that will be ready to go this season. Somewhere in that mix, Blankenship will find three replacements. TU's offensive line will obviously start five guys, but will run about eight-deep, so it will be fun to see who earns their way into that rotation.

Along with losing its entire defensive line, TU also lost three of its four starting defensive backs. Included in that list is Dexter McCoil, who wasn't only a great player but also a great leader. McCoil, who is the only TU player to ever lead the team in interceptions for three straight seasons along with being the school's all-time leader in picks, will likely have his leadership role absorbed by returning safety Marco Nelson. Michael Mudoh and Dwight Dobbins will compete for starting roles, along with Luke Snyder, Darrell Williams and three-star freshman corner Will Barrow. Once again, Blankenship will find starters, but we won't know who they're going to be for some time.

For a guy that is now 14-3 as a starting quarterback, Green sure took a lot of heat last season. Yeah, from time to time he'd make a decision where you couldn't help but cover your eyes, but for the most part, Green made the plays. The rising senior transferred from Nebraska prior to last season and 2012 was his first campaign with the Golden Hurricane. It takes time to earn the respect of your peers, but by the end of the 2012 season Green had seized control of this squad. He enters spring practice this season as the unquestioned leader of the team, which will allow him to take over from day one.