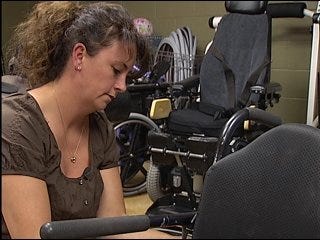 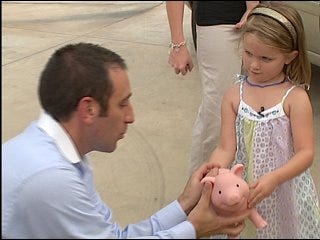 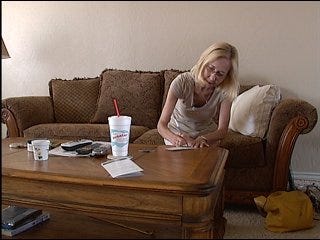 Blake Lambert's wheelchair was taken out of the back of his family's van, leaving his parents wondering how they would transport Black to school in the fall.

Blake, suffering from cerebral palsy, needs a special chair for his condition and his parents said it would be a struggle to afford another wheelchair, but a number of giving Oklahomans responded after NEWS 9 aired Blake's story on Monday. Now Blake's family has enough money to purchase another wheelchair for Blake.

Gail DeWitt of Westmont Medical Resources saw Blake's story on NEWS 9 and said she wanted to lend a helping-hand.

"We may be ordering from four or five, 10 different places to put this equipment together for that child," DeWitt said.

Hearing about Blake, DeWitt and the people of Westmont Medical Resources began looking for the equipment to build Blake a new custom wheelchair. Before he gets a new wheelchair, Blake needed to see Teresa Tisdell, a physical therapist.

"This is an opportunity for people to show how God can work," Tisdell said.

Tisdell, working for free, will help custom fit Blake's chair. In the meantime, Neuro Resources is giving the boy a temporary wheelchair to use.

Ella, 3, also wanted to help buy the new wheelchair. She opened her piggy bank and gave her $4 in saving to Blake. Although his new chair is going to cost thousands, people like Connie Lawrence said every penny donated is a step forward for Blake.

"I think it works for people to do good things for other people," Lawrence said. "He deserves even better than what he had."

After learning her son is going to get a new wheelchair that will change his life forever, Blake's mother prayed God will bless everyone willing to help her son.

"I don't know what I would do without him," Charboneau said. "Hopefully, it will come back on them ten-fold."

In addition to the wheelchair, Kent Clingenpeel with Enid A-Ambucs donated a therapy tricycle for Blake. Many more people have donated to the cause, all of which is going to making Blake's life easier.

Blake's new wheelchair should be ready in two or three weeks.