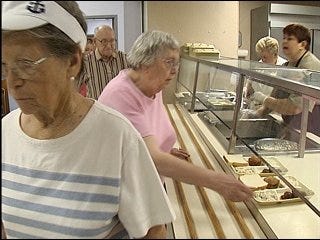 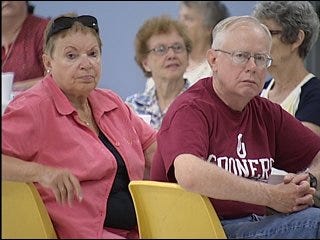 WARR ACRES, Okla. -- Tough economic times have cities across the country looking for ways to cut costs. City leaders in Warr Acres are looking to trim the budget by possibly closing the doors to a local community center.

For more than 20 years senior citizens have gathered at the Warr Acres Community Center for meals, fellowship and even basic medical care. But that costs the city money, money that some residents and city officials question if the city can afford.

"I have my lunch and it's cool and why wouldn't I want to come here," Irene Altizer-Dawson said.

Altizer-Dawson is one of about 50 senior citizens who come to the Warr Acres Community Center every day for a hot meal and fellowship.

Recently, hot meal discussion has been about if and when the center will close its doors.

According to city officials, Warr Acres looses about $20,000 a year operating the center. Council member Richard Bricker said the city isn't targeting the center but looking for ways across the board to cut costs.

"I believe the issue lies in serving the community and the cost in serving that community as well as the short falls we can anticipate coming through the next financial year," Bricker said.

Warr Acres mayor Marietta Tardibono is one of the center's strongest supporters, but said she realizes the city's financial concern.

"I recognize that we have been going in the hole, but I'm going to try and do something to keep it open and fight for it," Tardibono said.

City Council will discuss the fate of the community center during the next city council meeting on August 19.

The community center is also used as a cooling station and a church on the weekends.