The greatest comic strip EVER 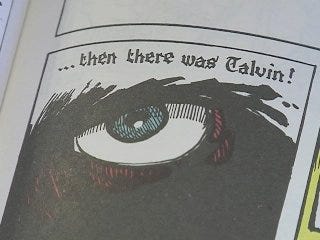 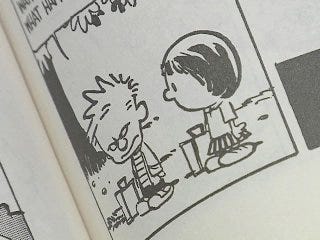 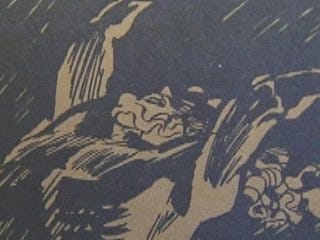 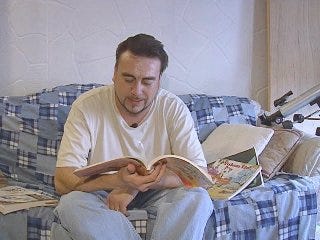 I can't believe that there are people out there who have never heard of the comic strip Calvin and Hobbes.

My boy and I were having breakfast at his school, like we do every day. The topic for discussion at the boy's breakfast table that morning was favorite comics.

One boy voted that the Incredible Hulk was the best. A different boy down the table chimed in on how Spiderman could beat the Hulk hands down. A third boy said that nobody in the universe could beat Iron Man. With my mouth full of Coco Puffs, I said without hesitation, "Are you guys kidding me? Calvin and Hobbes beat them all! His imagination and where it takes him and his best friend is unrivaled!" Instantly, the table of 25 boys was quiet and looking at me totally confused.

A voice from the opposite side of the table broke the silence by asking, "Who's Calvin and Hobbes?" My head turned towards the voice so fast that I pulled a neck muscle.

At the end of my rant, all the boys just dismissed me as an old senile 38 year old. It was at that moment that I decided to dedicate this week's blog to Calvin and Hobbes, in my opinion, the world's greatest comic strip.

What's wrong with parents today? Don't they share their childhood pastimes with their children? Maybe that's the problem with today's youth; too many video games and not enough use of the imagination.

For your viewing pleasure, I've narrated a couple of my favorite strips. Just click on the Tribute to Calvin and Hobbes link to the right of this article.

The greatest comic strip EVER