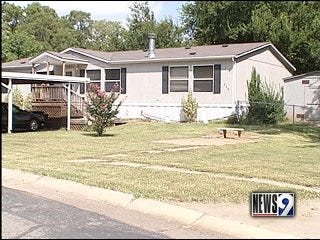 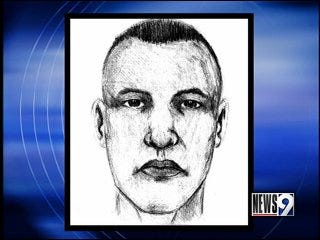 OKLAHOMA CITY -- Police are investigating a home invasion on the south side of the city late Monday night. The intruder is still on the loose and residents in the area are worried.

A man broke into a mobile home in south Oklahoma City, and he was only wearing his boxer shorts.

People living in the area said it is usually quiet.

"I have a 4-year-old and a 5-year-old, and my husband and I feel secure enough in having them her," area resident Rhonda Sestak said.

The man went into the trailer, stood above a woman, who was sleeping, and touched her neck.

"He asked if there were any family members at home, and she said yes, there are family members here, and when he heard those words, he left," Oklahoma City police Sgt. Gary Knight said.

Now authorities are looking for a Hispanic male, described as 5'6'', 160 pounds, 35-years-old, with a buzz cut and crooked teeth.

"Obviously it's an odd and alarming set of circumstances. If you're asleep and you wake up and there's a man standing only in underwear in your bedroom," Sgt. Knight said.

Police don't know if the man took anything when he left, but he didn't attack.

People living in the area hope that he's caught soon.

"It's kinda scary, because I mean, like I told you, not a lot goes on around here," Sestak said.

The intruder is wanted for questioning about first degree burglary and molestation. If you have any information, call Crime Stoppers at 235-7300.