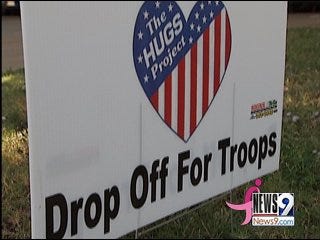 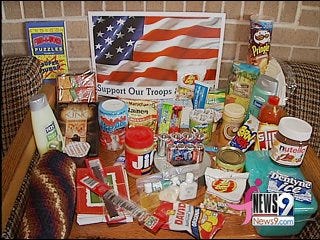 OKLAHOMA CITY -- Christmas season is here for a local organization that supports our troops overseas, and the need for donations is larger than ever.

The HUGS Project is in its fifth year of operation, and it's grown exponentially each year in all 50 states and dozens of foreign countries. This year -- they need more than $27,000 just for postage.

In a time when the economy has taken center stage local volunteers at the HUGS Project said for a moment, take your eyes off of Wall Street and look to the main streets in the Middle East. Our troops are still fighting.

"We wouldn't have the freedom if those guys weren't over there taking care of us," mother of son in Iraq Deanne Pipher said.

Pipher is dropping off items for Christmas Care Packages. The HUGS Project drive has begun. And the need is greater than ever to get gifts to the men and women overseas.

"Can you imagine waking up Christmas morning and you have nothing under the tree?" Karen Stark with the HUGS Project said. "We didn't like it when we were kids, we don't like it any better when we're 18 or 19-years-old or 40-years-old for that matter."

The HUGS Project is asking not for essentials, but nicer gift items. Because something like a new release DVD allows the troops to forget about what they may have seen that day in combat.

"Maybe a hand-held game, something our guys can go, ‘Wow, I've got something special for Christmas'," Stark said.

Firefighters at every Oklahoma City Fire Station are ready to accept your donations.

All 35 drop-off spots will be open every day.

"We will get them to the proper people where they package them up and send them overseas to the people fighting on the front line," Tommy Iago, Oklahoma City Fire Battalion Chief said.

Again, if you don't want to donate items, the HUGS Project needs money for postage to send the packages overseas.