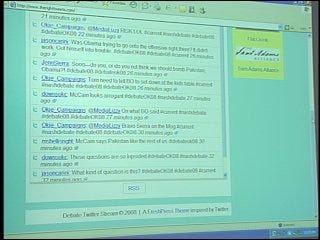 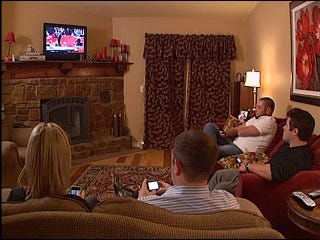 OKLAHOMA CITY -- More than 100 million people tuned in to watch the presidential and vice presidential debates on TV, and Tuesday's showdown in Nashville is no different, but the way people are reacting to what they hear is different.

New technology is changing traditional viewing habits. Traditional watch parties aren't as popular as they used to be and that's mostly because of the convenience of the Internet.

Like millions of others, Brian Downs and his buddies are tuning into the debate, but instead of keeping their eyes on the TV, Down and his friends are keeping a close eye on their phones. They're texting other debate watchers on the site Twitter.com.

Downs is also executive director of the group Oklahomans for Responsible Government.

"People are very busy, they have a lot of things going on and this is an easy way to participate," Downs said.

Twitter is a social networking Web site that allows users to instantly communicate with one other on the computer or by using text messages. Downs created a specific Twitter stream for Oklahoma voters to discuss the presidential debate.

"I think it's important that we get feedback from fellow Oklahomans on what they think of the debate," Downs said. "Not just the candidates, but the issues being discussed."

Downs said it's simply a sign of the times as more people are discussing politics in cyberspace, rather than face-to-face.

"Come November 4, you'll see the traditional debate and watch parties, but in terms of these debates, I think people want to get involved, but they want to do it in the comforts of their own home," Down said.

Twitter is a free service, but if you're using your cell phone to text to twitter, normal texting charges will be applied to your bill.

Join in on the Twitter debate by clicking here and entering the debate number #debateOK08.