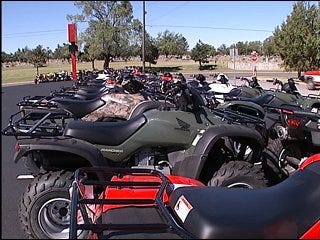 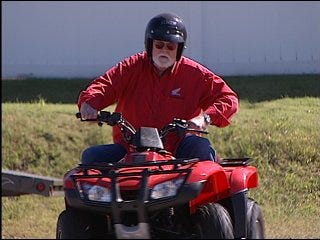 OKLAHOMA CITY -- Although gas prices have dropped a bit, they still take up a big chunk of Oklahomans' budgets. A new proposal could continue to help ease the burden.

Selling ATV's is Chuck Cantwell's job, but although allowing them on the road is something that could boost sales, the proposal is not something he supports.

"They're not manufacturing to run down blacktop roads, they are manufactured strictly for road use only," Cantwell said.

"Some of these vehicles, even on rough terrain, can get up to 30 mpg," Dorman said.

There are concerns about the safety of letting ATVs and UTVs on the road, but Dorman said he thinks they are safer than motorcycles. Dorman also said there would be restricitions.

"These things will never be allowed on the highway or interstate," Dorman said.

The vehicles would only be allowed on local or county roads with speed limits under 40 mph. Requirements would include installed turn signals, insurance and a valid driver's license, but the mandates did not ease Cantwell's worries about safety.

"I personally don't think it's a good idea," Cantwell said.

Legislation is expected to be written by the end of November. If passed, each city council would still have to approve it for the law to be valid in their area.

Supporters of the idea said they believe it will be popular in rural farming areas or quiet suburbs.