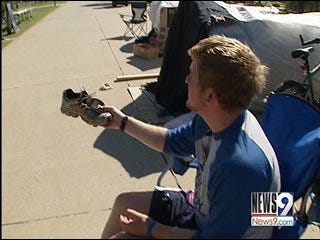 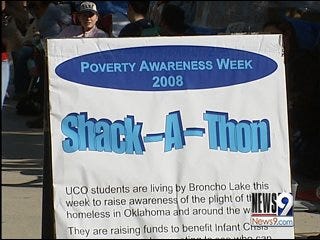 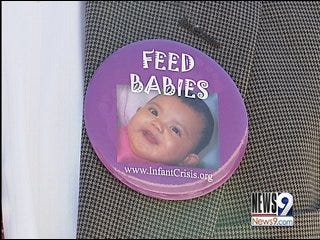 EDMOND, Okla. -- We hear a lot about the toll the recent economic crisis is taking on retirement plans and stock portfolios, but what about people who don't have those things, who are already in bad shape financially? How many people will end up homeless as a result of this economic downturn?

Some metro students are raising awareness of how tough it is for those people.

Students at the University of Central Oklahoma in Edmond represent a wide range of backgrounds, economic and otherwise, but few could really understand what it's like to be homeless, until this week.

All this week close to 200 UCO students have been living -- and sleeping -- in cardboard shacks around Broncho Lake.

"I've lived in the shack the last three days, haven't gotten very good sleep at all," UCO student Michael Ooten said. "It was really cold the first night, I woke up and had a guy in here and we were cuddling, I'm not going to lie, it was so cold."

The so-called Shack-a-thon is part of the school's annual Poverty Awareness Week.

"They get to feel for a week, in a contrived environment, what it might be like to be homeless, so their horizons are broadened, but more important, they're raising awareness on poverty in general," Josh Krawczyk with UCO's Poverty Awareness Week said.

As part of the experience, the students are raising money for Infant Crisis Services by panhandling.

"You'll ask them for some change and either they'll flat out ignore you and act like you don't exist," Ooten said.

Some said that most people asked have been generous.

"They have," UCO student Sarah Tucker said. "We had one gentleman this morning leave us $20, so it's been pretty awesome."

"Every dollar that comes into our agency will feed a baby, and to that baby it makes a difference as well," Miki Farris with Infant Crisis Services said.

"It's not a lot of money is some respects, but it's an impressive total for what they're doing, begging for change, they're wanting people to give change to make change," Krawczyk said.

And the students said they feel like they are making a difference.

The students set up their camp Sunday afternoon. They haven't totally roughed it; they've had access to electricity and showers, and they have still had to go to classes, but most said this has been a great learning experience.