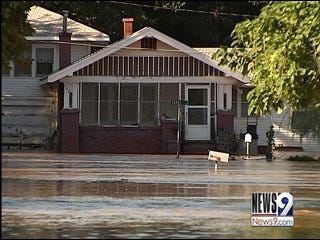 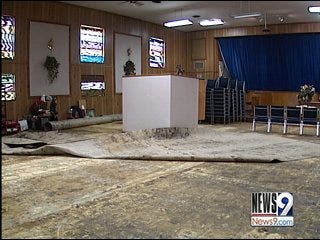 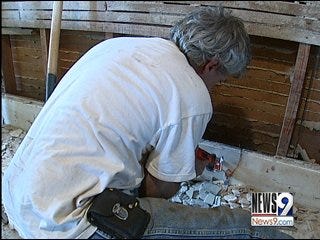 KAY COUNTY, Okla. -- It's been a month since severe floods hit several northern Oklahoma counties, including the town of Blackwell.

Just last week, the White House denied federal disaster aid to help flood victims in these counties, but other help is on the way. Days after FEMA denied individual aid to flood victims, the Small Business Administration, or SBA, is stepping in to help with loans.

Not everyone is satisfied with this relief response.

"There are alot of folks who lost everything," Pastor Robert Johnson said.

"We're going to have to re-carpet everything," Pastor Johnson said.

NEWS 9 revisited the Tabernacle Church. When the floods hit, every room and hallway was underwater. Now, the walls of the church are stained with mold and mildew.

"We're just preparing ourselves to start to work on the walls, and getting the rest of the carpet up," Pastor Johnson said.

Pastor Johnson is taking the repair and cleanup process into his own hands after the news came in that FEMA denied aid to his church and hundreds of homes in Blackwell.

"I wasn't really awfully surprised, but did think there was a possibility they could help," Pastor Johnson said.

The Small Business Administration is pitching in by assisting homeowners, renters and business owners with disaster loans.

"We just don't like to borrow money, and so we hope we can raise enough money to fix it," Pastor Johnson said.

Not too far from the church, families like the Woodwards were counting on FEMA's help.

"I hadn't really needed it before, definitely need it this time though," Blackwell resident Clifford Woodward said.

Just a few weeks ago, Woodward salvaged what he could for his family. He's still cleaning up the mess 15 inches of high water left behind.

"It's taking a drain on us," Woodward said. "We're working from the time we get up to the time we go to work."

Without the federal disaster aid, Woodward said he has little choice but to borrow.

"It'll be a cold winter without walls or insulation," Woodward said.

Woodward said he will be one of dozens of Blackwell residents applying for the SBA loans first thing Monday morning.

"It'll help me get the house back in shape before winter," Woodward said.

Those interested in applying for the SBA disaster loan can do so at the Chamber of Commerce in Blackwell until October 30.