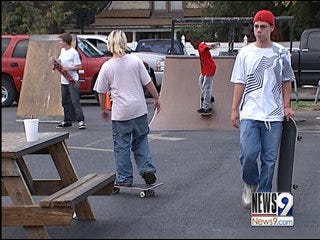 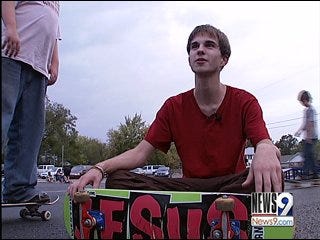 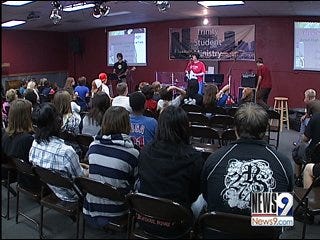 ADA, Okla. -- There's a new kind of church down in Ada, and it's attracting kids with a bad reputation.

The makeshift skate park in the parking lot of an Ada church has become the hippest Tuesday night hangout in town. It has given skateboarders a place to land kick flips and worship the Lord.

"Skate Church" was the idea of a Christian man who saw a need to reach out to a group of teens he felt were overlooked and misunderstood.

"Found some hard core kids, kids that definitely had some issues, and definitely some work that needed to be done" Skate Church founder Dennis Cavins said.

Cavins went out, got the kids and brought them to the church with promises of a free meal and access to skateboarding ramps. The biggest perk was that no adults wanted to kick them off their property.

"I was just wanting to get free skateboards. I was just coming here, getting free food, wanting to hang out, hang out with friends. But man, the feeling that God is in this place, it's clear when you get into that building," skater Ethan Hickerson said.

At Skate Church, riders worship with a rock band, and hear a message.

This idea is making a difference for these teens.

"I would not be at a church. I hated church before this place, and now, this is just awesome man. I'd probably be drunk or something," Hickerson said.

Skate Church proves that it's not always just about working with people in the church, sometimes it's about going to the people.

"God had called us to the mission. It was one of those things where it just felt absolutely that nothing was going to turn me away from that thing, Cavins said.

Skate Church is every Tuesday night at Trinity Baptist Church in Ada.