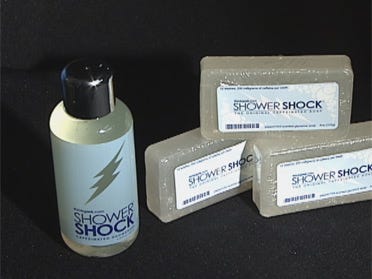 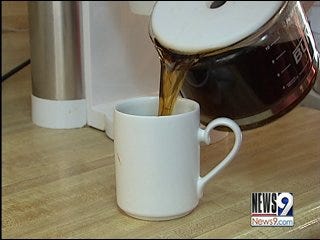 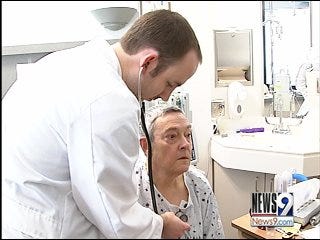 OKLAHOMA CITY -- Coffee represents 75 percent of all the caffeine consumed in the United States, and over 400 billion cups of coffee are consumed every year. But what if you were able to get your caffeine from a different source?

There's soap on the market that is infused with caffeine that has some wondering if it does the trick.

Two Oklahomans put it to the test; a doctor and a nurse, two high powered professionals who admit to drinking more than their fair share of caffeine during the day.

"I usually have two sodas at lunch and then one or two at dinner," Dr. Bradley Pillow said.

Despite having the last name of Pillow and working as an anesthesiologist, this doctor doesn't get much rest. And when he's on call, Dr. Pillow doesn't have one on which to lay his head.

It's not much different for nurse Tracy Sliger who works on the same floor.

"Taking on-call hours and sometimes up to 2 in the morning answering calls," Sliger said.

And more often than not, a can of soda serves as her much-needed boost.

"I drink Coke every morning to start my day," Sliger said.

Now, a new product is offering a caffeinated boost without the consumption. Shower Shock, a soap available for purchase on ThinkGeek, claims to have 200 milligrams of caffeine per wash. That's about how much you'd find in a regular cup of coffee.

Some wonder if a cold shower along with this soap would snap the sleep-deprived subjects out of their slump. They decided to give up caffeine for one week and use the soap instead.

Tulsa dermatologist Kelli Lovelace got wind of the experiment, and she didn't hold out much hope for this non-clinical trial.

"I just don't think that amount of time that it's on the body is enough for you to absorb the right amount to get that jolt we're all looking for in the morning," Lovelace said.

The subjects soldiered on for another week.

"By day two I was going through caffeine withdrawal; I had headaches," Pillow said.

Sliger didn't avoid all caffeine. She ate chocolate during the day, but that wasn't enough to keep her on an even keel.

"My fuse was a lot shorter; more irritable at work," Sliger said. "Things that would not necessarily have bothered me were getting on my nerves a lot faster."

ThinkGeek said that this is just a gag gift and isn't supposed to replace regular coffee.

Both doctor and nurse said they will never use this soap again, proof that when it comes to caffeine, it's hard to improve on the old grind. But, the volunteers said that the experiment served as a wake-up call to cut down on their caffeine intake.