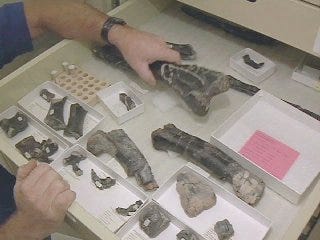 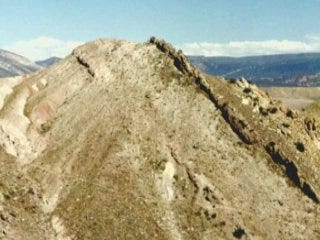 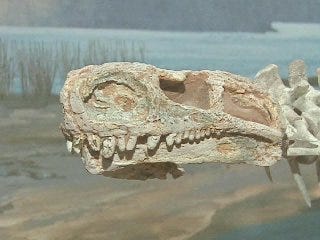 NORMAN, Okla. -- From the highest point of our state, to the woodlands that haven't been explored, dinosaurs can be found in every part of Oklahoma.

"Oklahoma is fossils from the grass roots down; there are fossils everywhere," Dr. Cifelli said. "It's truly a remarkable state because of the diversity of the kinds of things we have. People get this idea that dinosaurs are only found in really exotic places like Mongolia or Patagonia."

Some of the dinosaur material from Oklahoma is the oldest ever found.

Our official state dinosaur, the Saurophaganax, is only found in the state panhandle.

"We do feature a very large meat eating dinosaur out there," Dr. Cifelli said. "This thing goes by a kind of complicated moniker, Saurophaganax, but it's basically an Allosaurs on steroids. It's a real big bad Allosaurs. It's got three big claws on the hands and big jaws, so a very impressive one. It's only been found for certain in Oklahoma."

Even the animal with the longest neck in the world has been discovered in our red dirt.

"The other really cool thing we got from south eastern Oklahoma is this thing we named Sauroposeidon," Dr. Cifelli said. "It's a long necked dinosaur and it's actually related to the Brachiosaurs, but it's about a third larger. It's got the longest neck of any animal known in the world at 39 feet."

According to Dr. Cifelli, many of the most recent discoveries have all been found in the same area.

"Most of our discoveries through the 1990's and on into this century have been made actually at a state prison property down in south eastern Oklahoma," Dr. Cifelli said.

The person who found the dinosaur bones has a unique tie to the prison as well.

"That material was discovered by a guy who trains the prisons canine unit," Dr Cifelli said. "His job is to basically run these dogs all over the whole property and he's a backwoodsman and he knows bone when he sees it."

Discovery of dinosaur remains still occur in Oklahoma, most of which are found mostly by locals.