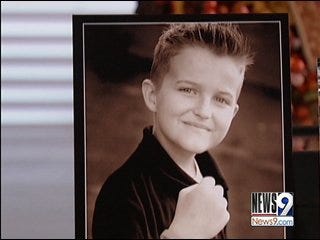 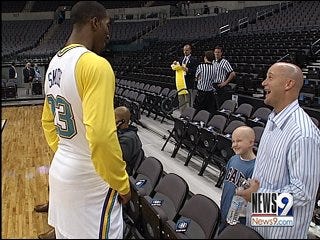 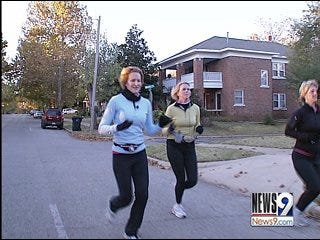 OKLAHOMA CITY -- At just 10-years-old Mitchell Whitaker died of complications from leukemia. He fought until the end. Now, his family, and more than 40 of their friends continue his fight.

Early Saturday morning, when most people are still sleeping, Tracy Whitaker is wide awake, with some of her closest friends.

"It's a lot of work; it's a physical challenge," Whitaker said.

Whitaker and her friends are training for a more than 26-mile marathon.

"We are accomplishing something many of us have never done before," Paige Dawson said.

This all started with a birthday wish.

"All my girlfriends have been planning something to do for our 40th birthday, and I just decided this would be a great idea," Whitaker said.

She asked her closest friends to celebrate 40 years by running a marathon with her to raise money for leukemia.

"I just won't ever forget that moment of just standing there going, ‘wow'," Lisa Doss said. "Absolutely, absolutely you can forget the cruise. There's nothing we'd rather do than this."

Whitaker's goal was to convince not one, but 40 friends. So far, nearly 50 have signed on.

"She's my best friend, I mean, you know, we were there when Mitchell was sick and when he passed away and you just couldn't say ‘no'," Heather Miller said.

Mitchell is their inspiration.

"He had the cutest smirk and I can just kinda see him smirking right now, kinda nodding his head," Whitaker said. "I think he would think it's a great thing."

Mitchell loved to play and watch sports. He was a huge Hornets fan. And the players were fans of Mitchell. They embraced him while he fought leukemia. Last year, Mitchell lost his battle with cancer.

"We would always say, ‘Keep fighting,' to him and he would do just that and at that the end we released him of that we told him he fought and he did what he needed to do," Whitaker said.

"That's what we're doing, we're fighting for other families to find a cure," Whitaker said.

Whitaker and her friends take that fight to the streets. Her husband, John, still can't believe so many people are on board.

"We've got a killer out there that's taking our children and it affects kids every single day and what I love is the fact that you've now got 40 or 50 foot-soldiers out there," John said.

The soldiers are fighting for awareness, for money, and for Mitchell; a fight Tracy wishes she never had to have.

"It's a good thing that we're doing, and they've said Mitchell would be proud and I do think that he would be, but as great as all this is I would rather have Mitchell here," Tracy said.

The Whitaker's dedication to this cause won't end with the marathon. Their goal is to raise $1 million in Mitchell's honor.

The women will run the marathon in Arizona in January. They'll raise more than $150 thousand in this event. The group is training with Team In Training.