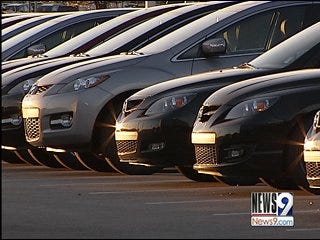 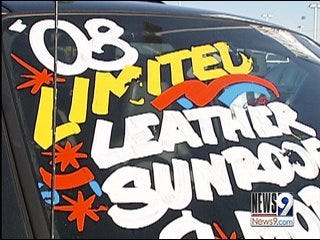 OKLAHOMA CITY -- Car sales are down, which could make now the perfect time to buy. Many dealers are offering a lot of incentives to lure customers.

"We've gone and had zero percent, we've had rebates as much as $9,100 and Fords about to come out with employee-customer pricing again," said General Manager of Bob Moore Ford, Stan Grady.

Customers have taken note to the deals as well.

"They actually worked with me pretty quick on it," customer Cathy Latimer said. "I expected to have to haggle. They just cut me a deal right off the back. We talked a little bit and they just want to sell cars."

All the gloomy news about the economy just doesn't hit home for new car buyers we meet.

"I'm retired military, I'm a writer. I get royalties on my books, and I won property here, and it doesn't have much of an effect on me," customer John Culbertson said.

A lot of dealerships offer zero percent financing, and the lenders are handing out money to the average consumer.

"They're going to get as good of a deal if not better as far as interest rates go and terms...as they could a year ago," said Finance Director of Bob Moore Mazda, Steven Schroeder said.

Dealerships are moving into yearend clearance sales so consumers might see prices on 2008 models drop, even more.

"It's a pretty good time to buy," Latimer said. "If the economy's down, why not stimulate the economy by buying a car."

The rebates and big savings customers will find depend on the type of car bought and the dealership.

Dealerships said they're doing about 10 percent better than the national numbers, but sales are still down 15 to 20 percent.