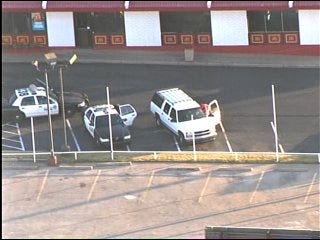 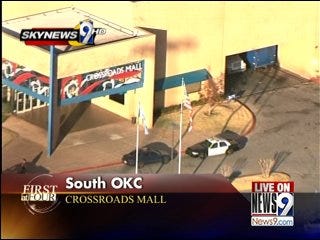 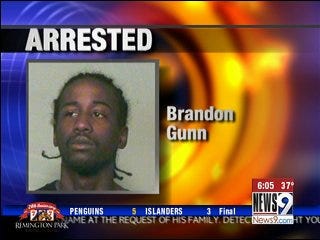 A police helicopter was following a vehicle with three suspects inside because authorities received a report that Brandon Gunn, one of the suspects, brandished a gun on Interstate 40.

An unidentified pickup driver told police he had exchanged obscene gestures with the driver of the SUV the suspects were driving before someone in the SUV pointed a gun at him.

The three suspects drove into the parking lot of Crossroads Mall, and one of them ran into Dillards.

Police did not evacuate the mall. Authorities surrounded all the mall's entrances and exits and are were able to surround the suspects' vehicle.

Police did not find a gun on the suspect that ran into Crossroads Mall.

One unidentified person was arrested on a warrant out of Arkansas and another, 21-year-old Brandon Gunn, on a complaint of pointing a firearm. The third suspect was also was apprehended but not arrested.

Employees within the mall did not report any disturbances. Police and mall security aked workers to remain calm and let customers shop freely.

Some stores voluntarily locked down during the incident.