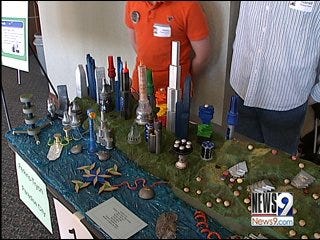 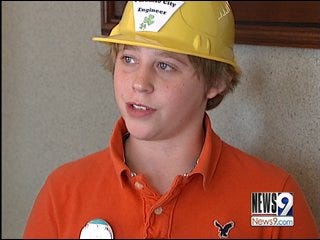 OKLAHOMA CITY -- A group of Oklahoma seventh and eighth graders took part in a contest in which they combine math and science to protect the environment.

These budding engineers are making a difference by looking to the future and using creativity, imagination and a little technology to build and design a city of tomorrow.

"There are solar panels on all the buildings. They're a lot smaller than they are today and can be different colors," said Jesse Hover a Future City Engineer.

These Oklahoma students are participating in the National Engineers Future City Competition, which gives young students a taste of engineering. This year, the theme has gone green.

"Kind of the theme is how water efficient houses can be like if they can use less, and use less energy to have water and stuff," said Garrett Dollins a Future City Engineer.

Garrett Dollins is part of the brain power behind Paradise City. His two classmates helped him come up with the name and design.

"Off of the song, Guns N' Roses. They sing ‘Paradise City,'" Hover said.

Keeping with the green theme, the budding engineers built their project out of items they found around the house like crayons and markers.

Even if they don't take first place, the students have learned something new, so everyone walks away a winner.

"It's not just all theory and have a textbook and memorize this. They get to apply it and when they see that and see how useful that is, then it's a lot easier to learn," Future City Organizer Todd Hiemer said.

The winning team takes their future city to Washington D.C. to compete in the national finals.