Dozens Of OKC Firefighters Called Out To Plant Fire 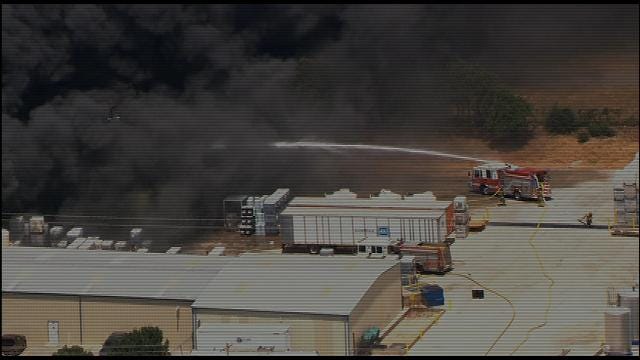 Oklahoma City fire crews have extinguished a five-alarm blaze at a chemical company near Interstate 35.

Deputy Fire Chief Marc Woodard says buildings adjacent to Bachman Services were evacuated for a time Tuesday as firefighters worked to contain the blaze. Woodard says paramedics treated three people from the evacuated businesses for heat exhaustion at the scene.

The fire was contained about 4 p.m.

Oklahoma City firefighters struggled Tuesday afternoon to prevent a five-alarm fire from spreading from a chemical plant to nearby businesses.

Thick, black smoke billowed into the air as fire crews battled the flames at a building belonging to Bachman Services near Interstate 35 and S.E. 25th Street.

The fire started around 1 p.m. in the 2200 block of the S. I-35 Service Road. The call originally came out as a forklift on fire, but when crews arrived they discovered a building was engulfed in flames.

Between 60 and 70 firefighters fought the flames. There were reports of small explosions from inside the building. There was some confusion about what business the burning building belonged to, but a fire chief has now confirmed it belongs to Bachman Services, a supplier of oilfield specialty chemicals.

Supervisors told firefighters there were about 400 55-gallon drums filled with chemicals inside the burning building. Fire crews said because of the nature of the some of the chemicals, water would not put out the flames and they may just have to let them burn.

Although the wind blew the smoke plume to the south, traffic on nearby I-35 was not affected. Oklahoma City police and fire departments did urge people to stay out of the area while crews battled the fire.

The American Red Cross is at the scene, providing firefighters with water and snacks to help keep them hydrated and fueled in the intense heat. EMSA crews are also on scene just in case firefighters require medical attention.

No one has been hurt in the fire. 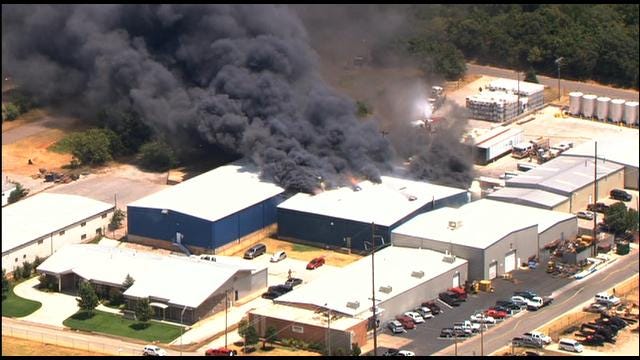