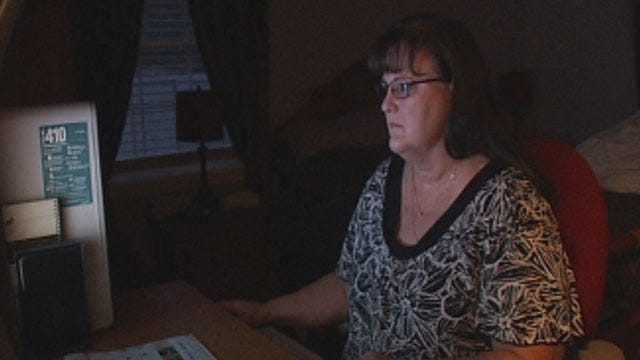 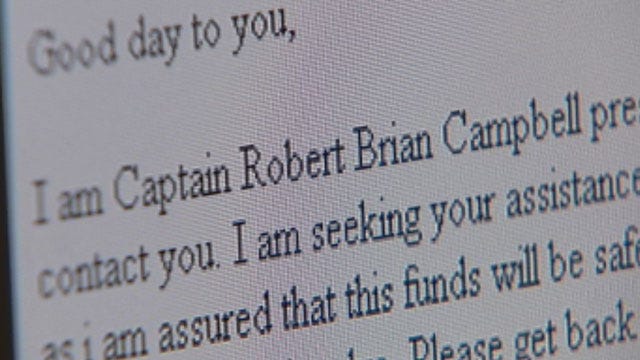 A metro family sent out a warning Monday night about a scam artist pretending to be a member of the United States Army. The person who claimed to be a serviceman sent Dee and Gene Gibson an email that asked them to help move a large amount of money into the U.S.

"I don't like the military being used," said Dee Gibson, who has seen scams before, but thought it was one went to a new low.

When Dee Gibson opened up the email, she knew something was wrong because it was full of spelling and wording mistakes.

"I actually had to read it two or three times and then I printed it off and showed it to my husband because I thought, well first, I wasn't sure what they wanted and I thought the amount of money was unreal," Gibson explained.

In the email, the scammer claimed he was presently in Afghanistan with the U.S. Army and needed help evacuating the sum of $5.2 million. He also reassured the recipient that this is not a stolen money and there are no risk.

But Gibson did not fall for it and hopes her warning prevents others who might have given thought to helping this alleged scammer.

"I thought, I'm not clicking on the link in the email because in case it sends a virus or something spam on my computer," she said.

News 9 responded to the email, and asked for more specific information on who the person asking for help was and where the money came from. As of Monday night, there was no response.

"To fall on people that don't have much that are still willing to give if they want to help someone, that's not right," said Gibson. "It's wrong and I don't want to see other people fall for it."

Authorities recommend never giving out personal or financial information to anyone you do not know. You can also report any scams you come across to your local law enforcement agencies.