Near White-Out Conditions In Woodward Due To Winter Storm 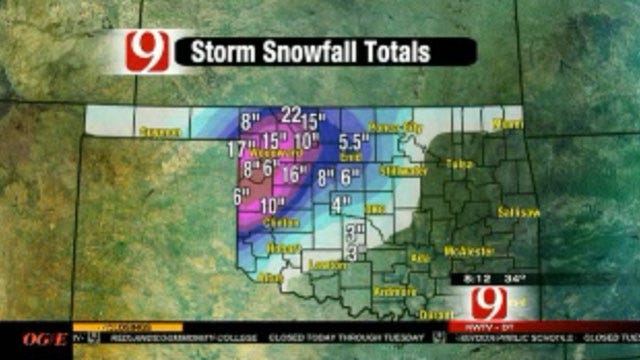 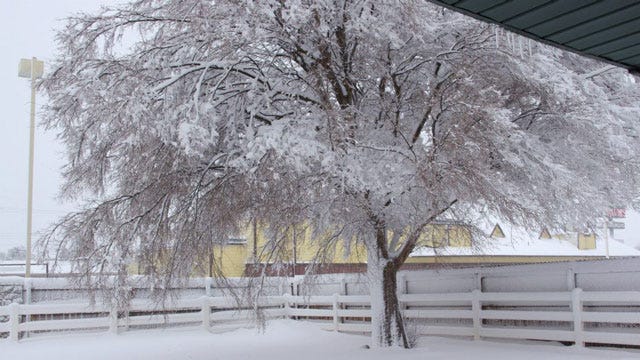 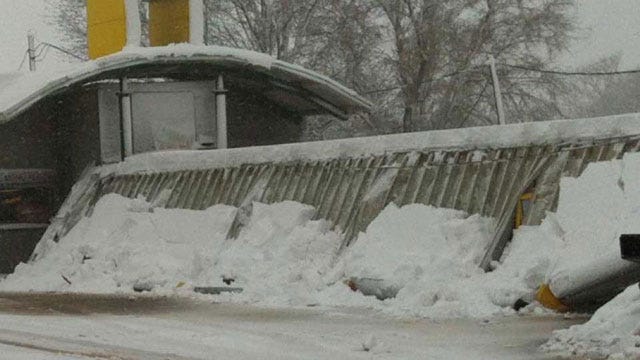 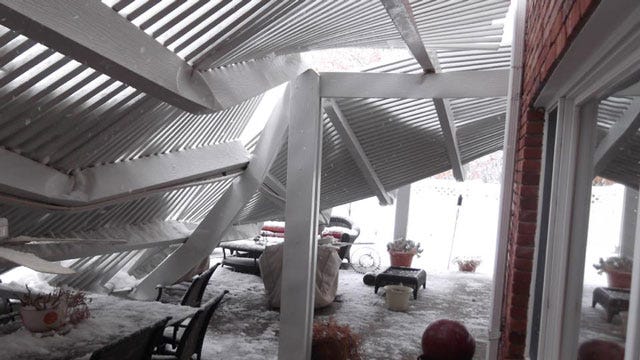 A significant winter storm has brought as much as 22 inches of snow to parts of Oklahoma on Monday, according to the News 9 Weather Team.

At the request of Gov. Mary Fallin, Monday afternoon, Lt. Governor Todd Lamb declared a State of Emergency for 56 Oklahoma counties due to the excessive snow and severe weather. The executive order allows state agencies to make emergency purchases related to disaster relief and preparedness. It is also a first step toward seeking federal assistance, if it's needed.

The area just west of Alva, Oklahoma, received 22 inches of snow during the storm.

One of the hardest hit areas was Woodward, Oklahoma. According to the News 9 Weather Team, Woodward received 15 inches of snow.

Emergency crews in Woodward confirmed that one person is dead after heavy snow brought down part of a roof at a home. That person's identity has not been released.

No weather-related injuries have been reported at this time.

Snow damage was also reported in Alva, Oklahoma. The awning at the Sonic Drive-in in Alva collapsed under the weight of the snow. At the campus of Northwest Oklahoma State University in Alva, the pergola at the president's house has collapsed.

Power Outages Due to Winter Storm

Many parts of the state are also without power due to the winter storm. As of 8:30 p.m. Monday, OG&E is reporting that 8,481 customers statewide do not have power.

Oklahoma Electric Cooperative reports 19,259 outages. And PSO reports that 12,276 customers are without power at this time.

Heavy snow forced the Oklahoma Highway Patrol to shut down roads in much of the panhandle and northwest part of the state.

All highways in the northwestern Oklahoma counties of Cimarron, Beaver, Texas, Harper, Ellis, and Woodward remain closed until further notice, according to the Oklahoma Department of Emergency Management.

Crews are out in Woods, Alfalfa and Major counties, reporting slick and hazardous roadways while treating roads and plowing as needed.

ODOT reports US270 in Canadian County is closed between Calumet and Geary due to drifting snow. Heavy, blowing snow is being reported throughout the western half of Canadian County.

Travel is discouraged in Garfield, Kingfisher, Logan, and Noble counties due to heavy snow and strong winds. You can call (405)-425-2385 to check on road conditions.

The winter storm has created dangerous driving conditions along I-40 west of the metro. Crews could be seen towing stranded vehicles in Canadian County.

Oklahoma Highway Patrol says it hasn't seen any serious accidents in Canadian County, just a number of vehicles that have slid off the Interstate.

"It's slick you got to be careful," said Truck Driver Thomas Herschbach.

Herschback started his shift Monday evening driving to western Canadian County where co-workers had their big rigs stuck in the snow near Calumet.

Calumet had some of the worst conditions from OKC to Weatherford along I-40 Monday.

Drivers in Blaine and Beckham counties are encouraged to check weather conditions before heading out and to allow extra time getting to a destination should travel be necessary.

The Oklahoma Highway Patrol is urging motorists to avoid travel in all impacted areas.

Both the University of Oklahoma in Norman and Oklahoma State University in Stillwater announced their campuses would close early Monday due to the winter storm.

OSU announced Monday evening that the school will be closed on Tuesday as well.

You can send us your snow day pictures at pics@news9.net.

Oklahoma City street crews will be on standby overnight, waiting for snow to accumulate or temperatures to drop to just above the freezing mark before plowing or salting City snow routes.