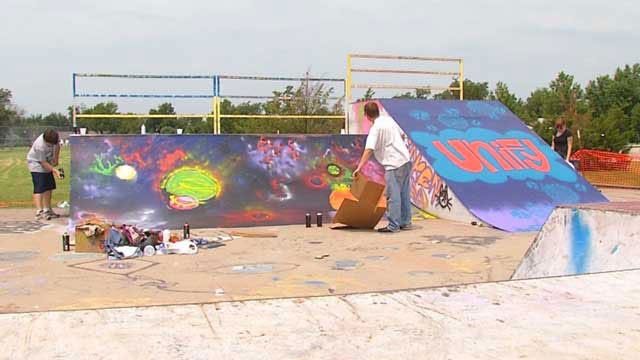 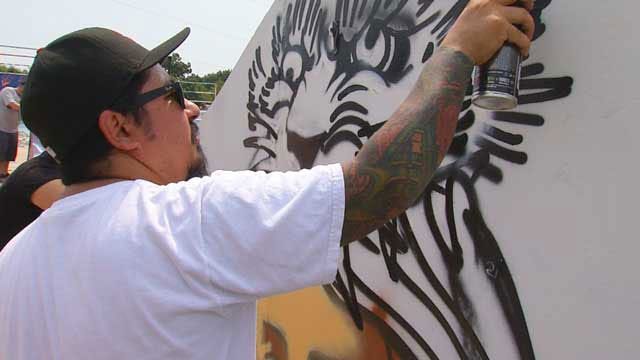 Artists leave fresh graffiti all over the skate park at Andrew's Park in Norman. But don't worry, it's all legal through the city's CRE8nSK8 project.

"I'm not personally much of a skater, but I really enjoy spray painting," said Andy Jacobs, art coordinator for CRE8nSK8.

This is why Jacobs has found himself returning each year to Blake Baldwin Skate Park located at Andrew's Park in Norman, not to skate, but to create.

"I want a cacophony of color," he said. "I want the whole thing to explode with just eye peeling freaking vibrance."

And for the past several years, it has. In 2011, Jacobs started the project, CRE8nSK8, to cover the park and skate ramps with contemporary street art. The City allowed it.

"These kids wear this park out, with all the wheels and grinding and stuff that they do," he said. "The city repaints the park every year anyway, sometimes more than once a year."

Marcy Cordell is one of more than two dozen artists that come out each year to repaint the ramps.

"It's exciting to see Okies get a legal place to paint," said Cordell. "A project like this brings to people's mind that it's not just vandalism, it's a medium. It's just a spray can."

A spray can with a few simple rules, no political or religious messages and no nudity or violent images.

"If we get everybody out and everybody involved, in one day, we can go ground to top and the whole thing looks like a garden made out of paint," said Jacobs.

Through the project, the park is repainted each year and the money for the project comes through donations.  In 2012, CRE8nSK8 won the "Oklahoma Recreation and Parks Society's" Award of Excellence.